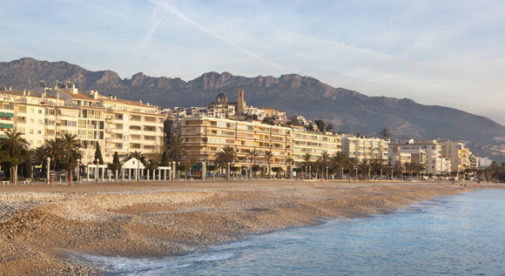 It’s past midnight on yet another balmy evening and Barry Ogden and Karen Taylor are strolling home along the beach after a spontaneous gathering of friends at a café. When they first moved to Altea, Spain, last March, they were usually home in the early evening but they’ve now adapted to the Spanish way of life…often staying out late unintentionally.

Taking their dog Pogo for his last evening walk, they inevitably encounter friends who they join for a drink. Other friends who pass by join them, and between the friendly discussions, wine, and tapas, the time quickly passes.

The pair were tired of the snowy weather in Alberta, Canada, and the impact it was having on their health. When Barry retired from his accounting job and Karen from her executive secretarial position, they decided to move to Costa Rica and ended up in the expat favorite of the Central Valley.

“The warm weather, the affordable cost of living, friendly, warm people, and the relaxed lifestyle appealed to us, which led us to stay there over five years,” says Karen. But, last year, they were ready for a new adventure.

Deciding they wanted to be closer to Barry’s sister, who lives in England, they did their research and liked what Spain had to offer. Coming from Costa Rica, they already knew some Spanish, and wanted to live in a Spanish-speaking country. They liked the warm weather, European lifestyle and culture, and wanted access to live music as Barry also plays saxophone.

They chose the Mediterranean side of Spain, specifically the Costa Blanca area, where the weather is warmer with less rain than in other parts of Spain. After exploring several towns, they were smitten with Altea, a former fishing village, with winding, cobbled streets that meander past whitewashed homes leading up to the church with its blue cupolas at the top of the hill.

The cost of living in Altea was a big draw for the couple who have found their costs are low…even when compared to where they lived in Costa Rica. They have a spacious, three-bedroom apartment with a gorgeous view of the iconic hilltop church and plaza for $545. They enjoy the bounty of the sea and quality, local produce for home-cooking, and inexpensive bottles of Spanish wines, available for as little as $2.30. When they dine out, they typically pay no more than between $17 and $23.

Public transportation is an easy way to get around and buses and trams take the couple to the nearby towns. A trip to the bustling town of Benidorm is just $1.70. Sometimes Barry plays his saxophone at a jam session in a bar in nearby Albir. Seldom is there a charge for live music at a restaurant or bar.

Barry and Karen are loving their new relaxed life in sunny Spain. The couple have found it incredibly easy to make friends in Altea with the many English-speaking expats hailing from such different countries as Ireland, Scotland, England, South Africa, and the U.S. who are friendly and inclusive.

They have a few favorite cafés and bars near their house, and as regulars, they get special free tapas, such as a delicious array of French cheeses from the French proprietor of a beachside bistro for $1.70. At another nearby beachfront café a glass of wine is just $1.37, which includes a free tapa from the dazzling array in the display case, such as a slice a baguette with various toppings like ham and cheese; tomato and anchovy topped with an olive; or Spanish tortilla (similar to an omelet, but with potatoes.) And without being asked, restaurant staff sometimes even bring treats for the dog.