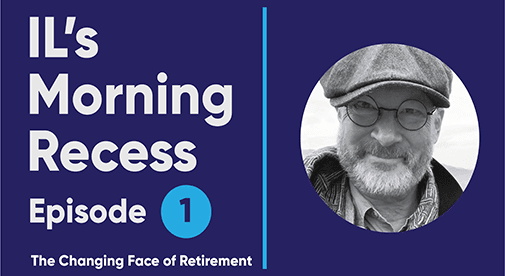 On IL’s Morning Recess, Dan will have a cup of coffee or three while looking at the lighter side of expat life. He’ll touch base with friends and correspondents from around the world, share highlights from International Living’s country Facebook pages, take note of current events impacting lifestyle and travel, and let you know how things look from his perspective.

It’s called Morning Recess, but join us anytime for the latest updates from Dan’s personal perspective, whether he and Suzan are out on the road, at home in their most recent overseas home town, or back in the U.S. visiting family and friends and playing with their granddaughter. Sit back, chill out, grab some coffee, and welcome to IL’s Morning Recess!

Hi, guys, Dan Prescher here. This is episode 1 of my International Living video blog. It’s something I’ve been meaning to do for a long time now but haven’t had the chance. Oddly enough, world events have kind of conspired to give me the opportunity, and I’m taking advantage.

You also may have some time and opportunities on your hands’ thanks to current events, and I’m glad you’re making this blog part of your routine…if routines are even a thing any more. Anyway, welcome.

I want to spend some time in this initial blog to give you some background. My wife, Suzan Haskins, and I moved abroad 19 years ago to write and do research for International Living. I will try, by the way, in every one of these blogs to get Suzan to make an appearance, but I will almost certainly fail, and more’s the pity, because she’s brilliant and beautiful and would make a great addition to this blog. I’ll keep working on her in any case.

Anyway, for almost two decades Suzan and I have been living and working abroad. We moved to Ecuador in 2001, and since then we’ve lived in seven different communities in four different Latin American countries. We’re currently permanent residents of Mexico, and we love it. We have family in Mexico, and in Panama, and friends throughout the Western Hemisphere and around the world.

And right now, I’m talking to you from the basement in beautiful Omaha, Nebraska.

The reason for that is, we have a beautiful six-year-old granddaughter who lives here with her parents, and since she was born, we’ve been spending as much time around her as possible. You guys with grandchildren will know that they change on a daily basis, and we wanted to catch as much of her formative years as possible. We want to put our stamp on her before she sets up.

This has meant a lot of back and forth for us from wherever we’re currently living abroad to see her, and that’s a really common thing among expats living overseas. Some people think moving abroad is like jumping off a cliff, it’s a one-way proposition, you go, you’re gone.

But for most people, even after they reach retirement age, the life changes don’t stop. Suzan and I didn’t stick in the first expat haven we moved to, or the second, or the third…we became kind of serial relocators. Each move had some kind of work or lifestyle change that motivated it, and even after we retire someday, we don’t expect that will stop.

So for lots of expats living around the world, coming back home occasionally…or regularly…or part-time…or even moving back full time is a valid response to changes in circumstances, either personal or financial or whatever. And change is the one thing you can count on.

We’ve been doing the same thing, adjusting to circumstances and spending more time in the States as our granddaughter grows and changes and becomes more entertaining and engaging and smart and beautiful by the day.

Which is why, when COVID19 made its appearance, we happened to be in the States. Which is why we won’t be going anywhere…and I mean anywhere even out of the house we have here in Omaha close to the kids…for as long as necessary to get through this pandemic thing.

Which is why I finally have the time and opportunity to do this blog. I’m in my little corner of the basement getting my work done from here and doing the same thing you’re probably doing — which is what I call “watchful waiting” — keeping an eye on the news and current events, keeping the lines of communication open, following best practices for getting through what, just yesterday, became a bona fide national emergency in the U.S.

I have to admit, though, that voluntary quarantine isn’t an unalloyed hardship for me. I’ve always been a little reclusive—which is maybe strange for a guy who travels for a living—but I’m lucky enough to have a job I can do from anywhere on the planet that has an internet connection. So sitting by myself in a comfy chair writing…or blogging or playing music…suits me right down to the ground.

But it won’t last, I’m pretty sure. This will pass, things will get back to normal, whatever normal turns out to be after this.

I’m pretty sure I’ll still be a Stephen Batchelor Buddhist. This is the entire philosophy right here, which is great for my limited attention span.

OK, I have laundry to do and dinner to think about and I have an online interview with a guy in Costa Rica coming up in a few minutes. And… I also have to gear up for a week in the Flint Hills of Kansas, where my mom likes to spend a month or so each Spring and Fall. That’s another story, and I’ll tell you about in upcoming blogs. It will be an interesting drive from Omaha to the Flint Hills given the current situation.

Anyway, that’s how we start. I’ll be checking in regularly from now on to let you know how things are going from this side of the screen. Breath deep, don’t panic, be kind, and I’ll see you on the flip flop. Talk to you soon.

The Upside to the Downside