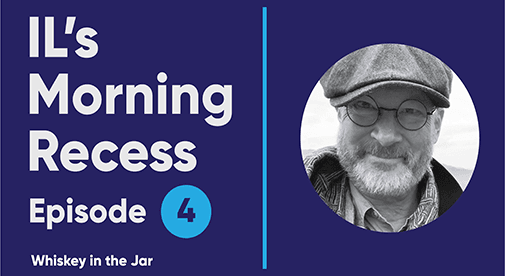 Good morning, good afternoon, good evening, good night, wherever you happen to be in the world. Welcome to International Living’s Morning Recess with Dan Prescher.

“I know it’s not politically correct to generalize about nationalities these days, but I’m doing it anyway. If I had to be stranded somewhere for the rest of my life, it would be with my wife in an Irish pub in a neighborhood where the local fiddler and melodeon player show up every night.”

In this episode, Dan reveals his favorite whiskey, his personal list of the best things about Ireland, and IL‘s Annual Global Retirement Index.

Good morning, good afternoon, good evening, good night, where ever you happen to be in the world. Welcome to International Living’s Morning Recess, I’m Dan Prescher. It is morning here, where I happen to be, and I’m on my third cup of coffee, which means I’ve already been rifling through the internet for new things to learn today.

And there’s plenty out there…my wife, Suzan, actually turned me on to this one. Do you know that coffee ring your coffee cup leaves on your desk or tabletop?
Well, listen to this: It turns out that your whiskey glass can do the same. And get this: American whiskeys all leave a similar spider web pattern under particular conditions. It’s like a fingerprint. Apparently, every American whiskey has a distinct one.

Which doesn’t worry me at all, because I drink Irish whiskey, so nobody is going to be tracking down my favorite tipple via fingerprint any time soon. Blows against the Empire. I’m not a connoisseur or anything, although I do get a kick out of the single pots and grain whiskeys out there. And whenever we visit the home office in Ireland, I do not fail to stop in at Henry Downes, one of the few Irish pubs left that still bottle their own whiskey, which is called Number Nine, and is really good.
As for me, though, call me provincial if you will, call my palate proletariat, but my days are drawn together and tied in a neat bow each evening with a glass or two of regular old Jameson. I don’t drink it neat, I don’t water it down. Just a small splash or a single ice cube, just enough to wake it up.

All of this, of course, puts me in mind of Ireland, which I’d happily retire to tomorrow. I’m not even Irish…that I know of…but my sister did do one of those mail-in DNA tests and, and if we really are brother and sister, we come mainly and generally from Northwestern Europe and the Isles…with some Eastern Danube watershed thrown in there. So I’m pretty sure that plenty of my ancestors were either heading to Ireland, or heading out of Ireland, or holing up in Ireland for whatever reason over the course of our family history.

And for whatever reason, I feel oddly at home there. I’ve had that strange, irrational, gut feeling in only two other places…Edinburgh, Scotland, and Newcastle, in England up by the Scottish border. It’s strongest in Ireland, though, so I have a feeling that whatever conquest or migration or refugee trails my Northern European ancestors followed over the centuries before winding up in North America involved a lot of quality Irish time.

And it isn’t just the hills and lakes and seashore, or the great whiskeys and beers, or even the music, although that’s way up at the top of my personal list of the best things about Ireland.

For me, it’s the fact that you can still have actual conversations there. They still converse…not chat or babble, but converse when given the opportunity, so you need some words, and you need some wit, and you need a sense of humor, and you need to keep an open mind, because you will not necessarily be told what you want to hear. And it’s not an argument in Ireland, it’s a discussion…even it voices are occasionally raised, and even if very occasionally you have to duck a punch.
And I know it’s not politically correct to generalize about nationalities these days, but I’m doing it anyway. If I had to be stranded somewhere for the rest of my life, it would be with my wife in an Irish pub in a neighborhood where the local fiddler and melodeon player show up every night.

Can the weather get nasty? Yes. Is it the most affordable place on earth? No. But it ticks every other box on my Great Place to Retire checklist, so who knows? Maybe the migratory trails of this particular branch of my family line don’t dead-end in the green fields of America. We’ll see.

But what took me to Ireland in the first place? As I said. International Living’s home office is there! That’s where they put together this whole International Living thing that Suzan and I have been working and living at for the past 20 years, IL has actually been 41 years in the business of developing the best info on the best places around the world to live or retire, which brings up International Living’s Global Retirement Index, which you should take advantage of if you haven’t already. Each year IL editors put together a list of the top retirement destinations around the world ranked by cost of living, healthcare, infrastructure, ease of assimilation, ease of getting a visa, and a bunch of other categories. It unlocks all the best possibilities and leads to the details that might mean the most to you in your particular situation. And it’s right here! I’m giving it to you! Handing it to you on a silver platter! You’re welcome.

OK, I have to go make sure Suzan isn’t getting too involved in her whiskey research too early in the day, and if she is, I don’t want her to have to do it alone, so until next time, breathe deep, be kind, maintain situational awareness, and I’ll see you again soon.

We'd like to show you how you can upgrade your life and live richer using an Online Income Engine.

Best of all, you needn't leave your home to see how you could make this happen.