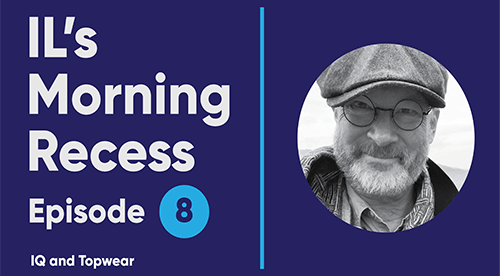 In today’s episode, Dan recommends some reads in the IL Bookstore, discusses an article on 7 ways to increase your IQ in 30 days, and shares an idea for a contest that may get him kicked off the internet.

This is Dan Prescher with this edition of International Living‘s Morning Recess. I almost called it Morning Edition. And sooner or later, I’m going to do that because I grew up on NPR’s Morning Edition, one of my favorite shows. But this isn’t it. This is Morning Recess. I’m here to talk about what’s going on in the world of expats. And you’ll notice that I’m wearing my brace today. Played a little guitar the other day. And it’s hard on this lower joint. It’s called the Carpel Metacarpal Joint. And if you’re an old guy like me who gets arthritis and it starts getting crunchy and grinding. And the guitar can aggravate it a little bit. But that’s not going to stop me from playing it a little bit. Take some ibuprofen. Everything’s going to be OK. I’m also going to wear my brace and get completely dressed for doing yard work today because the sun is shining and it’s a perfect day for doing yard work. And yard work is the perfect activity for social distancing because nobody wants to help you do it. You’re out there all by yourself. And I mentioned getting completely dressed because I just found out yesterday that there is a term for what you wear on a blog like this where everybody can just see you from the bottom of the frame up. It’s called Topwear. This is my top where right now I could be wearing anything under there. I could have trousers on, could be my Christmas pajamas. Could be a Speedo.

I even had an idea for a contest. I’d take a little photo, what I’m wearing down there and then have people guess what it is and give away free prizes. But then I realized that a smart fella would run an idea like that passed his much smarter wife to make sure he wasn’t doing anything that would get him kicked off the internet or arrested. So that’s what I’m going to do. Well, I just have to wait to see how that contest works.

Out cruising the internet today, so many cool things to find on there and we’ve talked about this before, the internet has changed everything about being an expat. I consider myself an expat even though we got caught here in Omaha, Nebraska, during this pandemic thing. So we’re sheltering in place here, but the internet opens up the entire world.

For instance, I just ran across a brilliant Washington Post article, a guy is digging a new parking lot for his pub in Ireland. He happens to run across a grave. Got three skeletons in it. They’re two thousand years old, hundreds of years before the Celts even got to Ireland. And there was enough quality material there to do a DNA test. It turns out the Irish aren’t Celts. The Celts are Irish. The culture didn’t go from Central Europe west, it went from Ireland in the aisles east, and the Irish got there from the Pontic steppes, they’re Scythians, they’re Sumerians from the steps north of the Black Sea. I live for stuff like that. It’s so cool. Deep, deep history.

Another great thing I ran across at Inc.com I in seek.com, a great article given our current situation on seven ways to increase your IQ in the next 30 days. Turns out, I’m already doing most of them playing chess.

I don’t really play much chess, but I play a lot of solitaire so I’m counting that. Meditation, 30 minutes each day. Butt on the cushion right over there. Sleep a lot. Never had any problem doing that. Learn a new language. ¡Ay, caramba! Mi nombre es Daniel. And play guitar. Look, I play so much it hurts. I’ve got that locked; all those things increase your IQ. A couple of the things that I’m not quite dialed in on yet are doing wind sprints. I don’t run. Nobody I know runs. Who would do that anyway? Who would waste their time running? But I did get out the dumbbells and the ankle weights the other day, so that almost counts. And taking creatine, which turns out to be a dietary supplement. It’s produced naturally by the human body. But the more of it you take, the smarter you get. Oddly enough, I started to wonder where am I going to get this creatine supplement here on voluntary quarantine? But I did a little more research, and it turns out that the best natural source of creatine, two sources actually, are a combination of meat and fish and complex carbohydrates. Shrimp linguine and spaghetti and meatballs. Are health foods. I mean, I’m in for health kicks. So I got to start eating a lot more of that. And as these episodes progressed over the next 30 days, you will probably be noticing me get smarter and smarter and smarter.

We’ll see. We’ll see how it goes. The happiest thing I ran across on the internet today is a person named Tom Bukovac, who is a journeyman musician, a session guy, and he gives guitar lessons from his garage while drinking Rolling Rock beer. My kind of guy. He is really smart, really fundamental, doesn’t read music, plays guitar. As you might imagine, like a master. Just great, great lessons. And Rolling Rock. How can you lose? He talks about his family up in his garage. He talks about his wife and kids in the house. And that put me in mind. Yesterday, the highlight of my week. Our granddaughter and her dad broke their quarantine and walked the dog over to see us, just to check up on us. It was great to see him. It was a nice day. We sat out in the backyard, maintaining social distance. And my granddaughter is now in this new phase where she makes up games for everybody to play and there’s a formula to it. She has a standard introduction. She says, may I have everybody’s attention? We’re going to play a game. Then she makes one up. These are not games that anybody has ever played before. She makes them up out of whole cloth. You can see the wheels turning. It’s like game improv. It’s extemporaneous. The only thing all of these games seem to have in common is running a lot. You run away from somebody, you run towards something, or you run around something. A little tough for an old geezer to keep up with. But it was great to see her. And I got a little exercise.

On the IL Bookstore today. I try to make a stop in there every day because there’s always something cool going on in the bookstore. Not least of which, Suzan and my book, Live Richer, Spend Less, International Living’s Ultimate Guide to Retiring Overseas. We wrote the book because we didn’t spend 20 years living abroad just to talk to ourselves about it. We’re sharing the knowledge. So, you’re welcome.

Also, I saw a great addition to the bookstore. Steve Garfink, our friend, who we see at conferences when we have conferences, wrote the book on Social Security and how to take advantage of it. The right way is called Retire in Luxury on your Social Security. I am of that Social Security age now where I’m starting to pay attention to this. And I’m really glad I ran into Steve Garfink in the course of our work because he’s straightened out a lot of things for me. You may be aware that Social Security is a deep and broad subject and you may be aware that you don’t know everything about it. But when you talk to Steve, you realize how much you don’t know about it. There’s a lot to consider. Steve’s book is a great way to do it. Retire in Luxury on Your Social Security. Also, in cruising through the bookstore, saw Warren Hardy’s Spanish course. Warren and his partner and Susan and I go way, way, way back in our expat experience. Susan and I took our first Spanish courses from them in their school in San Miguel de Allende. And that was kind of the basis for the rest of the Spanish we learned because it’s kind of a technique. It’s not just learning Spanish. You’ll learn at the Warren Hardy way. He discovered real early in his teaching career that mature folks learn differently than other people. How do I put this delicately? We’re not slower. We’re not ossified. We’re not stuck in our ways. We just learned differently. The years of our experience put a different slant on the way we learn things . Warren figured that out. And that’s the basis of his method. And it really works. That’s his specialty, teaching folks like us who in Spanish are tercera edad, the third age, how to effectively learn their new language. And you’re learning your new language, right? Everybody’s working on their new language at home while they had the time. You better learn how to check it out. International Bookstore.

OK, that’s it for now. I got to put real pants on. I’m going to get dressed and go out and do some yard work.

So. Stay calm. Breathe deep. Help each other out, maintain situational awareness, and I’ll see you on the flip flop.