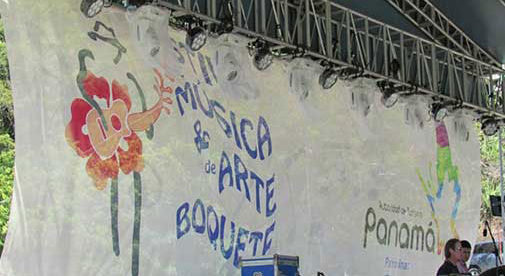 The Boquete Blues and Jazz Festival is one of the events that most expats who live in Chiriquí look forward to the most every year, and this February marked the 12th year of this annual event.

The first festival took place in 2007, and drew just over 200 people eager to listen to Panamanian musicians and a select number of international jazz musicians, and was located in the gated community of Valle Escondido in Boquete, due to its amphitheater with good acoustics and seating for up to 700 people. Little did Antonio Singh, the man who originally started the festival, know that one day the event would become a festival drawing attendees from all around the world.

Steadily growing every year since its inception, the event has now become an international event. In 2012, Antonio Singh decided to move on to new projects and a German expat by the name of Hans Lebuser took over the running of the festival.

Revamping the festival meant the addition of blues music to the original jazz genre, adding new sponsors, and making it a four-day event.

Traditionally the Boquete Blues and Jazz Festival starts on a Thursday with a New Orleans style parade where all participants dress in Carnival glitter and costumes. This is followed by a Garden Party on the Friday, which gives everyone a taste of who will be playing at the festival. In the evenings, Thursday through Sunday, jam sessions of all the musical groups can be found in the restaurants around town.

In 2017, after five years at the helm Hans Lebuser stepped down and John Wolff took over running the festival. Since 2012 many volunteers have been behind the scenes making the festival what it is today, and expats have been an integral part in the blossoming of this event, which has hugely benefited the area.

The festival continues to be hugely successful with the support of the community of Boquete, who have rallied around it. From being sponsors, volunteers, organizers, and promoters, the Boqute locals and expats look forward to the festival each year. And, the festival consistently ensures a boost in tourism for the town, as thousands visit for the festival with many coming back year after year.

Known for hosting well-known musicians from around the world, this year’s festival was no exception, with a stellar lineup of Deanna Bogart, Spyro Gyra, Maria Rivas, Otis Taylor, Dwayne Dopsie, Lance Anderson, Anne Harris, Ian Siegal, Magic Dick and Shun Ng, The Iguanas, The Nighthawks and many other well know Panama jazz musicians.

This year, changing location from Valle Escondido to the fair grounds of Boquete has meant more room for vendors and attendees. Since the fair grounds has two permanent stages the acts were spread back and forth between the two, allowing musicians to set up and break down sets without having the audience wait.

The location of the garden party also changed this year, while previously always held at the Panamonte Inn, this year it was held at the Finca Lerida above Boquete, with frequent shuttle buses running from the downtown area. Located on the hillsides above Boquete, this made for a perfect setting for a laidback way to enjoy great music in some beautiful surroundings.

Strolling between the sound stages, and taking in the crisp clean air and sights of the river and Volcan Baru made this year an exceptional one to remember.

If you are interested in attending this event next year, early planning is recommended as hotel reservations go fast, to keep up on the schedule for next years line up, visit
http://www.boquetejazzandbluesfestival.com.