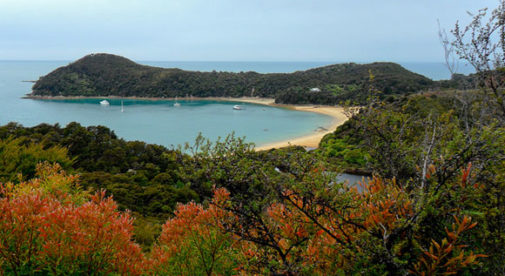 I’m just back from New Zealand and the lazy days of early summer in the southern hemisphere. I’m wishing I could have stayed the entire season. No apologies for using capitals: This was The Best Trip Ever.

Right now, I’m longing for another day on a fishing boat and lunch under a winery’s leafy trellis. I want to loll in a hot pool listening to the birdsong of the bush… tramp another coastal trail… treasure-hunt for more colonial collectibles… take a water taxi to some golden cove and beachcomb for shells…

Everybody speaks English, so there were no language difficulties. It’s clean, green and the roads are a joy to drive. And whether it’s mountains, seascapes or geothermal wonderland, the “Middle Earth” scenery is mesmerizing.

Sipping feijoa juice outside a sunny cafe on the Coromandel Peninsula one morning, I thought, “I could get used to this.”

Sure, it’s a long distance from North America. Flights from Los Angeles to Auckland average 13 hours. But it’s 24 hours from Europe—and I’d gladly do that journey time and again.

I’ll tell you more in an upcoming issue of International Living magazine, but although Auckland is pricey, I came across numerous lovely locations where two-bedroom properties rent for $650-$800 per month (that’s US dollars). Sometimes less. Utility costs run around $120-$165 monthly.

Although I’d baulk at buying clothes or shoes—they are expensive—supermarket costs were comparable to back home in Ireland. So I’d estimate a couple could do a month’s grocery/household shopping for around $500.

Whether it’s a $3.30 bakery steak-pie fresh from the oven, a fish ’n’ chips takeout, or posh-noshing on herb-encrusted rack of lamb, the food is fantastic. Most towns have a weekly farmer’s market, and roadside stalls and farm shops overflow with good things. One day I road-shopped for two punnets (small baskets) of strawberries, a lettuce and a huge bag of mandarin oranges—total cost was $7. Back home, I’d have paid at least $10 for inferior supermarket produce.

Kiwi cuisine’s international flavor isn’t confined to Auckland. Mostly I was wolfing down fish—it’s so good in New Zealand—but I ate Indian in Tauranga on the Bay of Plenty, Japanese in east coast Gisborne, and Turkish in art deco Napier. Purely by chance, I came across a wonderful Polish restaurant in Plimmerton, a little seaside town north of Wellington.

Before leaving for New Zealand, a friend asked: “Won’t you get bored? After all, you’re not really the outdoorsy type.”

True—but maybe I’ve never had the right outdoors in the right temperature before. Although November nights can still be nippy, it usually hit the high 60s and low 70s Fahrenheit during the day. That’s my idea of perfect weather.

Such was the effect of three weeks in New Zealand, even I felt compelled to tackle a four-hour tramp (hike) along the Abel Tasman National Park’s coastal path.

At the top of the South Island, the entire walk takes around five days—but even a short foray delivers a wealth of untouched pale golden beaches and sightings of seabirds and seals.

There was more than enough to keep me culturally entertained, too. I took in blues bands and art deco walks, photography expos and art galleries. Along with eye-catching murals, one little Bay of Plenty town called Katikati even provided a haiku pathway for my poetry fix. The biggest treat was catching a two-hour performance of the music of the emotionally-tortured Belgian singer-songwriter Jacques Brel. Strange to think I had to leave Europe for that pleasure.

Could I live in New Zealand? You bet. Admittedly it’s difficult to gain permanent residency without a particular skillset or a major amount of investment cash. But why not rent for a three- to six-month stay and discover why I’m raving about the place?

And there’s nothing to stop you buying property and letting it while you’re not there. Outside major cities, options for under $170,000 abound. In inland Norsewood, for example, $114,000 buys a three-bedroom house. Near where the Coromandel Peninsula joins the Bay of Plenty, a two-bedroom colonial-style cottage in Waihi town is $143,000. The sweeping white sands of Waihi Beach are almost on the doorstep.

Learn more about New Zealand and other countries in our daily postcard e-letter.

Simply enter your email address below to sign up for IL’s free daily postcard and we’ll also send you a FREE report: Australia and New Zealand: Good Living Down Under.