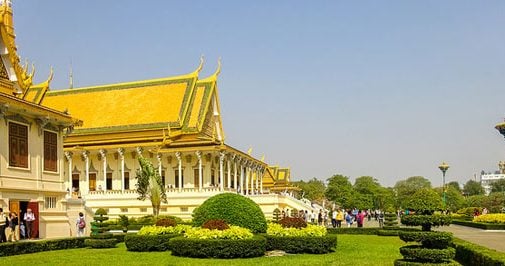 For a long time, Cambodia was bottom of the list for tourists and expats visiting Southeast Asia, until about 15 years ago, when the Hollywood blockbuster Tomb Raider was filmed amid the temples of Angkor Wat in Siem Reap.

The Western media descended en masse to the country on the news that the movie’s star Angelina Jolie had not only adopted a local child but also been granted Cambodian citizenship by the King, giving new life to Cambodia’s business and tourism.

The fact that Angkor Wat is the largest religious temple complex in the world, and a UNESCO site of unparalleled beauty, was enough to convince tourists to start visiting in their millions each year.

However, for many, Cambodia has remained one of the best kept secrets when it comes to expat living. The country provides some of the simplest and bureaucracy-free, long-term visa requirements for foreign visitors wishing to invest or work in the country.

Even better, the Cambodian government also welcomes foreign-owned companies and actively encourages foreign investment in an unlimited number of market sectors, making it a great place to do business.

In addition, there is the variety of scenic towns and cities that make up this fine country, with something to suit every taste.

For many first-time visitors, their initial stop in Cambodia is the modern, but colonial, capital city of Phnom Penh, where skyscrapers stand side by side with ancient temples and traditional markets. This is a mini-metropolis of over 2 million people where pretty much everything is available, from Western supermarkets, movie theaters showing Hollywood blockbusters, and a variety of food and coffee franchises including Burger King, Starbucks, and many more. It is also a center of fine dining, with hundreds of high-end restaurants serving French, Italian, Chinese, Korean, and every other type of national cuisine—including Cambodian—available in the heart of the city. And, you can enjoy a great meal for two for less than $50, with fine wine included in the bill.

The country’s second city (in terms of population) is the quintessentially colonial Battambang. French and foreign influence is clear to see in the local buildings, and a blossoming arts and cultural scene flourishes between the local and expat population.

Those who prefer to live by the water are also in luck with the premier beach destination of Sihanoukville, just a few hours’ drive from Phnom Penh. As well as offering a fantastic range of beaches and hotels to suit all budgets, there are also over 20 unspoiled islands to explore, as well as numerous fishing and diving excursions in operation every day.

About two hours down the coast you can also find the river city of Kampot, which has its own tourist industry—with all manner of watersports on offer—and a long strip of great hotels and restaurants. Less than an hour from Kampot is the much smaller beach destination of Kep. Once known as the “Saint Tropez of Southeast Asia”, it has only one beach, but more than makes up for this by having the best fresh crab market in the country, where restaurants will cook up an amazing meal of crab, fried with Kampot pepper.

But this only scratches the surface. The list of places to visit and things to do in Cambodia is endless, which is why so many tourists decide to stay and make it their home. And with over 100,000 expats now living and working all across Cambodia, it looks like Southeast Asia’s best kept secret is a secret no more.