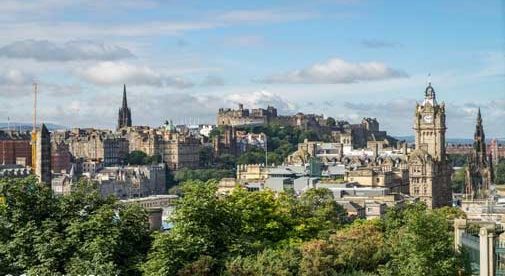 Calton Hill with a view on Edinburgh, Scotland.

Scotland might sound like an unusual place to retire, but for my husband, Roy, and I, ours was an unusual retirement. For one thing, we deliberately moved from the Southern California sunshine to a land of wind and rain. For another, we brought our entire family along.

Edinburgh is a small capital, with about half a million year-round residents. The city is bordered by the rolling green Pentland Hills to the south and the storm-tossed Firth of Forth to the north. At the center of it all, Edinburgh Castle looks down from its perch atop an extinct volcano. The city combines the Old World charm of narrow, winding lanes and tall, brown, sandstone buildings with the most dramatic weather and scenery you’ll find outside of a Hollywood movie. Theaters, restaurants, and museums abound, and yet you’re never more than a few minutes away from a walk in the country.

The active lifestyle was a primary draw for us. Two national cycle routes run through the city—a tiny part of the 14,000 miles of paved, traffic-free cycle paths in Britain. The Edinburgh section runs along a canal flanked by stone houses and lush greenery. We ride past colorful houseboats and through forests and farms.

The cost of living is lower than you might expect from a major European city. In terms of groceries, essentials are a lot cheaper. Milk costs $1.90 for around a half gallon, bread is about $1 for a one-pound loaf, free-range eggs are $2.50 for 15. Some fruits and vegetables cost much less (a cucumber was $2.79 in Los Angeles, while here it’s around 75 cents), as do personal hygiene items and vitamins.

If you’re willing to do your research, you can find some excellent real estate bargains. You can buy a one-bedroom apartment in the fashionable Morningside district for around $190,720, or for much less outside the city center. We needed a larger place, so we bought a six-bedroom house in a nice area for just over $525,000.

Residents also save on transportation. When my husband and I sold our cars before setting off, we agreed that we would probably need two when we arrived, just as we’d had in California. But when we saw how well we could get around walking, cycling, and on public transportation, we decided one car would do.

With several lively, well-developed commercial streets, Edinburgh is very walkable. The public transportation network—citywide and inter-city buses, plus a tram that serves the city—is clean, safe, reliable, and goes almost everywhere you want to go. It’s also free for residents over 60 years old. That, combined with taxis, rideshares, and car hires, explains why many people don’t own a car at all.

Although education may not be a concern for many retirees, for our family—with two teenagers in tow—it was. Edinburgh has a number of exceptional private schools, and tuition is a bargain, compared to similar private schools in the U.S. Scotland’s excellent public schools are another option. Students who have lived in Scotland for three years qualify for free tuition at any of the world-class Scottish universities.

The most pleasant surprise has been how welcoming people have been. Edinburgh is kind to tourists, but people seem absolutely thrilled when they learn we have come to stay. “Scotland is the most wonderful place in the world,” they say, often in those exact words. “And now you’re part of it. Welcome.”