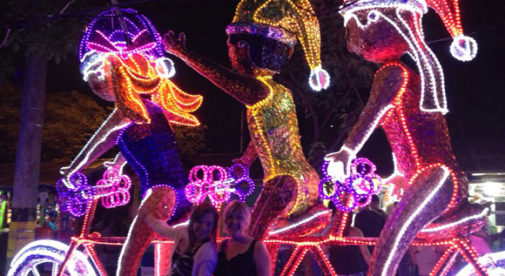 Boasting an epic display of over 30 million lights, it is no surprise that Medellín, Colombia has been rated by National Geographic as one of the top 10 places to view Christmas lights in the world.

The festive season in Medellín officially starts on November 30 at midnight, with an elaborate firework celebration. It’s called La Alborada and marks the night when EPM (the city’s public utilities company) who designs and sponsors the lights, turns on the extravagant displays and the locals chime in to celebrate with an incredible spectacle of homemade fireworks seen (and heard) throughout the whole valley of Medellín until dawn.

Medellín’s light displays, also called El Alumbrado (“the lighting”), are not your traditional Christmas lights. They are fantastic, carnival-like, 3D displays that sweep across the river, through the plazas, along the roads, hang from buildings, and drip from the trees in the parks.

Every year the city attempts to outdo itself and in 2014, Medellín did just that by hanging 30 million LED lights, 500 miles of rope lights, 11 tons of metallic decorative paper, and 170 tons of ironwork. This display required over 330 technicians who started working in August…but the hard work paid off and the lights attracted more than 4 million visitors.

Not only was 2014 the biggest light display on record, it was also the first time that EPM asked for citizen participation. They held an open call for ideas for the theme of the Christmas light show and got over 1,500 proposals. The chosen theme was “values,” focusing on peace and reconciliation.

The primary light display stretches for over a mile along the Medellín river. Some lights are hung across the river, displaying 3D boats of light and fish “floating” on the glowing river. In addition, large platforms are set up over the river, each one featuring a different 3D themed display.

The Christmas tree and ice rink in the Santa Fe mall are truly a spectacular sight to see.

Seeing the lights along the river is like being in an amusement park adventure. Many of the figures dance, twirl, and are interactive. Along the riverside vendors set up food stands, others sell glow sticks and toys, and performers play instruments, making it an event for the whole family.

The lights are sprawled throughout the parks including, Cerro Nutibara and Pueblito Paisa, Parque Lleras, Parque Poblado, and Envigado, which is another great spot to see Christmas decorations. Some Envigado residents are so proud of their own personal light displays that they will actually leave their doors open and invite passersby into their homes to show off their Christmas décor.

In Medellín, Christmas is celebrated on the 24th and is family oriented, making it a good day to walk along the river and see the lights without too many people. And if you still haven’t had enough fireworks (they seem to continually go off over the festive season), stick around Medellín for the New Year fireworks show…the best place to catch a 360-degree views of them is from the hills of Poblado or Nutibara.

If you’re looking to escape the cold and still keep the holiday cheer this Christmas, then Medellín is the perfect place to celebrate a festive holiday without having to scrape ice and snow off the car to go see the Christmas lights.

This special guide covers real estate, retirement and more in Colombia and is yours free when you sign up for our IL postcards below.