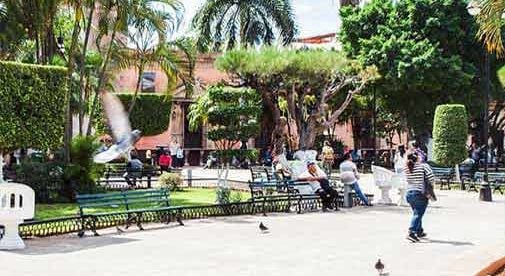 The Beast of the East closes in on Northern Europe.

Wave after wave of snow, sleet, and ice sweep across the U.S. and Canada.

The weather up north is bad and seems to be getting worse, even as spring approaches.

Us? We’re kicking back in our old hometown of Mérida, Mexico, where we actually have to head into the shade of a hot afternoon.

Are our friends and relatives up north jealous?

Not in the least. Because we’re their heroes.

We invite them to come down to our little corner of warm-weather paradise, and we show them how easy and affordable it is to live here.

We just spent a week with a big chunk of our extended family, eating and drinking our way around the streets of Mérida’s historic centro neighborhood.

Good food and cold cervezas are never more than a short walk away, no matter where you live in Centro. This area of the city has always been an interesting entertainment scene, but in the past few years, the number of unique, high-caliber eateries, bars, and bistros has exploded. This rise in quality and choice has actually upped the game of the established old regulars downtown, and everybody is benefiting. More and better food and drink means more patrons, and more patrons mean more activities, and more activities mean more jobs, and more jobs mean improved lifestyles for local business people and workers.

The whole equation is creating an unmistakable buzz in town…and it’s not limited to Centro. The city is growing rapidly to the north and east, and the same thing is happening…more choice, more fun, more people, more prosperity.

And showing our northern family and friends around makes us look pretty darn smart for living abroad in the first place. And not just for taking advantage of the warm weather, historic sights, and great cuisine.

It also happens to be incredibly affordable to live in Mexico right now.

It’s always been more affordable than the U.S. and Canada, but the exchange rate between the U.S. dollar and the Mexican peso right now means we can pick up the tab for a party of six at a trendy new fusion restaurant, in one of the most picturesque old squares in Centro, for less than I’ve paid for dinner for two in a comparable place up north.

If that makes me look like a hero, well…I’ll wear the cape for an evening or two.

Of course, once our family and friends learn that they could easily be doing the same thing themselves, the hero worship wears off. They start getting the notion that they could be heroes of their own expat adventure stories.

In fact, a few of them already are. They’re scouting the market and putting out feelers for plans—in the very near future—to make the Mérida lifestyle…the Mexico lifestyle…the expat lifestyle…their own.

The more heroes the better, as far as we’re concerned.