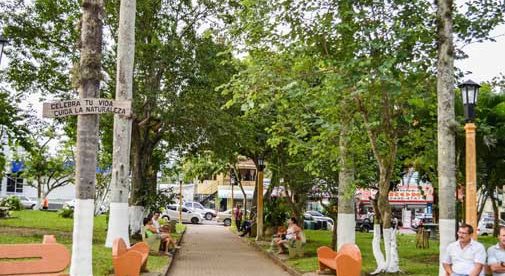 When Linda Ledbetter and Bruce Brasington chose to leave the U.S. for an international life in Costa Rica—the former cruising couple had five key criteria that were non-negotiable for their new home.

They wanted to continue their “no car” lifestyle they’d had for a decade while sailing around Florida and the Caribbean. They wanted to buy a “livable as-is” house—not a fixer-upper—and it needed to be one story “because we may grow old here,” says Linda.

Linda was also adamant there had to be high-speed internet access immediately available, so she could effortlessly communicate with her three children and four grandchildren back home in Florida using Skype.

And most importantly, the couple wanted to live in a Costa Rican neighborhood rather than a gated expat community. “We didn’t want to live in an American enclave,” says Bruce. “It is very important to integrate into the local community. That’s why we live here.”

Linda and Bruce first visited Costa Rica in 2005. Bruce was already retired from several businesses, and Linda was retiring from her work in school libraries and education. They took a short tour to learn about the country.

“We knew we did not want to go to the beach because it is hot and we’d already lived on the water,” says Linda. “We decided on the towns of Grecia or Atenas, in the Central Valley,” continues Bruce. “We wanted access to the beach and to be close enough to the airport for people to find us.”

Using a real estate agent through the Association of Residents of Costa Rica (ARCR), they chose the town of Atenas at the western end of the Central Valley—30 minutes from the San Jose International Airport, and an hour to both downtown San Jose and the Pacific Coast beaches. They bought their home during a quick follow-up trip to Costa Rica in early 2006.

“We wanted a town that was small enough where we could walk everywhere or get around easily because we didn’t want to own a car,” Linda explains. “Grecia was too big and spread out. Atenas was nice and small, and had everything we needed.”

“It was easy for us to move,” adds Bruce. “After living on a boat, we had 12 boxes, a new mattress, and Linda’s bicycle. So, it was simple because we had already divested of the houses and the possessions in the U.S.”

Upon arriving in Costa Rica, the couple promptly filed for legal residence as pensionados (retired people), knowing they needed to follow Costa Rican residence laws for problem-free living. They used the in-house attorney at ARCR for their residence…and also signed up for ARCR’s group rates for home insurance and healthcare with the Caja Costarricense de Seguro Social, known as “Caja” for short. The national healthcare system provides low-cost and good-quality healthcare in Costa Rica.

Next, they enrolled in language lessons from a private language school in Atenas. Bruce is still taking lessons 10 years later and likes to hang out with his 80-year-old Costa Rican neighbor, Raul…to talk about politics, and current events.

In order to transition to living in Costa Rica—getting their legal residence and learning Spanish were vital to Linda and Bruce. “Learn the language, respect the culture and respect the laws. And if you can’t do that, don’t live in another country,” says Linda.

Even though they are retired, the couple keep very busy. Linda spends her days on sewing projects, yard work, and creating instructional materials in English for Atenas school teachers. Bruce has learned to play classical guitar, and is continually creating and building things—from furniture to display frames, and solar cookers.

Additionally, they oversee the Atenas Friendship Library, which they began eight years ago. Over time, they’ve accrued more than 2,500 books donated by readers in the community. Unlike a traditional library, these items can be borrowed for free on the honor system that they will be returned.

Linda strongly recommends that expats keep a permanent address in their home country for mail, voting, driver’s licenses, etc. “You can live wherever you want in the world, but you should keep your ties to home because you never know what the future holds,” she says.