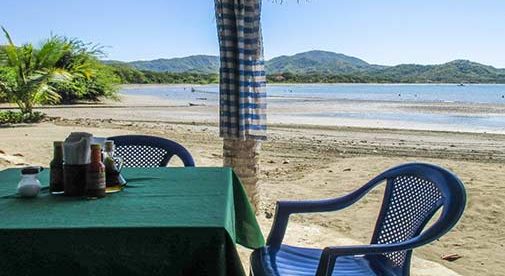 Chip and Jennifer settled in Potrero, a quiet fishing village with miles of pristine beach stretching along the Pacific Coast

Like many admirers of the Jimmy Buffett lifestyle, North Carolina native, Chip Little has long dreamed of owning a tiki beach bar in the tropics. His wife, Jennifer, remembers the exact moment the idea was introduced. “We were in Florida for our son’s baseball tournament in 2010. We were sitting around a tiki bar having drinks with friends and we all talked about how cool it would be to own one.” For Chip, however, it was not just “drunk talk,” it became a goal.

At the time, Chip worked in real estate development and Jennifer in media sales. Both careers had become stressful and the tiki bar idea would not vanish, so they began exploring places like Mexico and Belize. However, it was a trip to Costa Rica in October 2014 that set the wheels in motion. They explored some of the Central Coast and eventually landed in the Flamingo/Potrero area of the Gold Coast.

They fell in love with the area and could imagine their tiki bar. They continued researching online from North Carolina upon returning home, and found a couple of bars for sale: one in Potrero and one on the coast further north. “We returned in December and looked at both,” says Chip, “eventually making the final decision in March 2015 to buy the Potrero tiki bar, sell our home, and just do it.”

Jennifer adds: “Both sets of parents were in good health. Our boys both completely supported our idea. However, our community, with whom we have had a lifetime connection, thought we were crazy.”

The dream soon came crashing in. “I found out that the owner had sold to another party,” says Chip. “He quit communicating with us, but at that point we had already sold our house, our vacation home, and were committed to moving that August.”

Not to be dissuaded, Chip and Jennifer found a home to lease in Surfside/Potrero and moved with eight suitcases and no expectations in August 2015. They looked for other ideas while forging friendships with the welcoming expat community. They found a home to refurbish, with the intent to flip it, but ended up staying there.

Then a new opportunity presented itself. A woman Chip was working with through a local real estate office had a small golf cart rental business, with four carts, for sale. After researching the numbers carefully, they bought Rent a Golf Cart Costa Rica in March 2016. Between filling a much-needed niche and some serious marketing, they turned a tidy profit in the first year. After investing in four additional golf carts, doubling their capacity over the past two years, the company now provides the means necessary to live a comfortable, stress-free life.

“Since we are often the first point of contact when people make travel plans, we now offer airport shuttles and book tours for our customers,” says Jennifer.

Chip adds: “We have not had any real problems with any government bureaucracy. We have a really good attorney and accountant.”

In high season Chip and Jennifer work nearly full-time keeping everything running smoothly. However, in low season they have a bit more time to enjoy what Costa Rica has to offer, such as golf, sampling local cuisine, and soothing their souls watching sunset at the beach.

“We took a huge leap of faith. Faith is very important to us,” Jennifer concludes.

Sample Monthly Budget for a Couple in Costa Rica