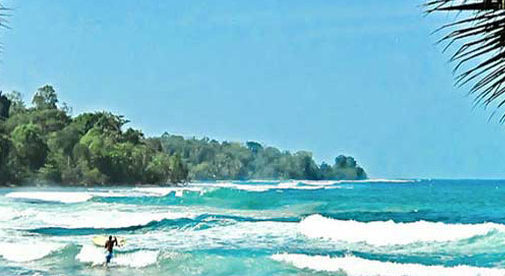 I am climbing a rocky slope wreathed in jungle greenery. All I hear are the waves behind me and the trilling call of a songbird. After a minute’s walk, the view opens up before me. A wood cabin with turquoise and orange trim catches my attention. Two friendly dogs bound out to meet me. Everything about the place is cheerful and relaxed. Just what visitors to this “hidden gem” Caribbean region come looking for. This is Surf Break @ Paunch, a three-cabin B&B service with an on-site restaurant, all owned by David and Alli Emerson.

When David and Alli honeymooned in Rincón, Puerto Rico, they found themselves dreaming of a little B&B of their own. “We liked that it was a small town, not over-developed with franchises and big resorts,” says Alli.

Panama was nowhere on their radar until David was wowed by some travel footage on television. “I didn’t realize how developed Panama City was,” he says. “I did a web search for other cool places in Panama and Bocas del Toro popped up.”

I showed Alli what I’d found and she loved the look of the place,” says David. “We planned a trip in October of 2014 and met with a realtor to see what was available. And we ended up moving here in November 2015.”

Bocas del Toro is one of the best-kept secrets in the Caribbean. The province is part-mainland, part-archipelago. The provincial capital, also known as Bocas Town, is on Isla Colón. It’s home to a domestic airport and a hub for tourists who come to visit the region. This is where David and Alli initially made their home.

Though they’d found a plot of land with a structure on it, David and Alli decided it would be best to gut it completely. During construction they lived in the busy part of Bocas Town, near the airport and small marinas used for water taxis and tours. To their surprise, it ended up being the best base for their first months in Bocas.

“It helped our business,” Alli says. “It was easier to get to know a wide variety of people. We met a lot of expats of all ages at hangouts like Bocas Brewery, and we did some volunteer work at the asilo ([a home for the elderly)]. It was a really nice way to introduce ourselves and meet everybody.”

Five months into construction of their house and cabin rentals, Alli and David were able to move out to their new business at Paunch Beach, about a 10-minute bike ride from the town center.
Far from the airport and hubbub of town, the quiet was profound. Though these days there are dozens of cars on Isla Colon, traffic past Paunch is light. “It was great to see people riding bikes to the beach,” says David. “That’s what this town was built for.”

The couple was fairly busy from the start, as their on-site restaurant got a lot of support from their local community. Once they had a few reviews on sites like TripAdvisor, the B&B started filling up, too. As the area around Paunch attracts mainly surfers, Alli and David found that they got more business at the restaurant when the surf kicked up, or when there was a local surf competition.

Though some days are busy, there’s also time for fun. “We love riding around local trails on our ATV,” says David. “But when it’s someone’s birthday or there’s something to celebrate, a group of us will go out on a big catamaran and stay out at sea all day. Those are my favorite days. That’s what we came here for.”

“September to October is my favorite time of year. The waters around Bluff Beach are really calm,” says Alli. “I ride my bike or walk…it’s about 25 minutes. Think of your favorite beach in the U.S. and imagine taking away the crowds, so you can have it all to yourself. That’s what Bluff is to me.”

The long, golden beach is rarely crowded. Most mornings it’s completely empty. Even on “busy” afternoons, you’re likely to see 10 or 15 people. “It’s just beautiful…my favorite beach here,” says David. “If you really want to get naked on the beach, this is the place to do it,” he laughs.

David and Alli have no regrets about starting a business in Bocas. “Everything in life is a risk,” says Alli. “But trying something like this makes you feel empowered and free. Dave and I embrace change, and even if things hadn’t worked out, we knew it would be an amazing experience.”