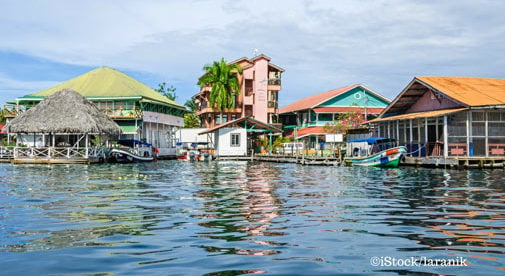 With crystal-clear waters and beaches surrounded by rainforest, Bocas rivals the best of the Bahamas.

For Wendy and Simon Langford, life wasn’t bad. They had a modern, “smart” house in Seattle and a good income. But the daily grind kept them from spending time together. Just into their 50s, the idea of retiring sooner rather than later appealed to them. And one day a little television footage changed their lives.

“We were watching House Hunters International,” says Simon, now 55. “We’d read a bit about Panama but aside from the Panama Canal, we didn’t know much about it. You see Caribbean havens in the media and wonder how people can afford to live on them. Still…we saw two back-to-back episodes on Bocas del Toro and it sowed a seed.” The couple began dreaming of a B&B on the beach…

The Caribbean islands of Bocas del Toro—part of Panama’s Bocas del Toro Province—are pristine, uncrowded, and stunning by any standards. The provincial capital is on Colón Island, where you’ll find the domestic airport and a busy, tourist district. But one need only venture 10 minutes out of town to be wowed. With crystal-clear waters and beaches surrounded by rainforest, Bocas rivals the best of the Bahamas. “When we first learned of Bocas it reminded us of the smaller islands of Greece, which we used to visit a lot on holiday when we were younger,” says Wendy, 56. “There was a low-key, laidback atmosphere, with no big chain hotels or restaurants.”

The couple started to research Panama online, paying particular attention to healthcare, safety, and other important factors. “Panama was constantly singled out as one of the top places in the world to retire,” says Simon, “and that gave us confidence.”

Not wanting to get their hopes up prematurely, the couple decided to go check it out for themselves.

“We flew to Isla Colón in April of 2016,” says Wendy. Her first impression was not stellar. It was raining and trash collection—which has since improved—was poor. “By the end of that day we were questioning things.”

The pair decided to keep an open mind and the next day, they met up with a realtor. “We went out in a boat and looked at some places and thought: ‘Oh wow.’ There’s so much to see, and it’s so diverse,” they say.

After seeing some other islands, the couple agreed to see a property on Isla Colón. “We had seen photos and weren’t enthusiastic. It was just…not nice. The place looked rundown and there was no mention of it being close to the ocean,” says Wendy.

As it turned out, the property was very close to Bluff Beach. The couple looked at the view, then looked at the house, then turned back to the view, and said: “We can do this.”

“We put our house on the market, sold our car and furniture, and moved to Bocas in October of 2016,” they say.

“Everybody thought we were crazy,” says Wendy. And it was a bit crazy. The pair went from an ultra-modern home to an off-grid fixer-upper.

To better manage the project, they lived on site, moving from room to room as the work progressed. “In three months we modified it from a four-bedroom, two-bathroom home to a five-bedroom, five-bathroom B&B,” says Wendy. They named it Oasis; a fitting name for the verdant property.

“When we first started on this endeavor, we weren’t out to make millions,” they say. “For us it’s more about living on the beach and sustaining a simple lifestyle. When you’re doing something you enjoy, it doesn’t really feel like work.”

“The beach is the world’s best in terms of how pristine it is,” says Simon. “We get so many visitors and yet—it’s unbelievable—there’s usually nobody on it, so it’s like a private beach. It’s surrounded by jungle, and there are fantastic trails where visitors can take self-led walks up to four hours long. The coastline changes dramatically as you walk, and you can swim and snorkel along the way in areas with calm waves. It’s so quiet—just you and nature.”

Retire in Comfort & Convenience in Panama