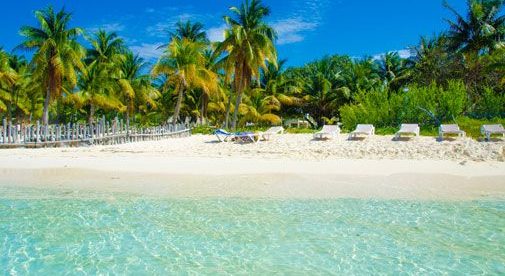 When the frigid winds and wet, heavy snows of winter threaten the northern state of Wisconsin, Gary and Mary Beth Vanlankvelt head south… All the way south to the small, tropical island of Isla Mujeres, off Mexico’s Caribbean coast.

“We usually arrive in December and don’t leave until late March or early April,” says Gary. “We began by visiting during spring breaks. When we decided to look for a place to escape Wisconsin’s harsh winters, Isla Mujeres won. It felt more like home to us and it was also very affordable.”

Gary and Mary Beth have made Isla Mujeres their regular winter get-away for the past decade.

“We’ve been regular Isla snowbirds since 2007. We love everything about it,” says Gary. “In fact, I’m really not crazy about telling others how wonderful it is here. I don’t want the island to become more crowded and lose its vibe.”

Gary and Mary Beth have good reason to love Isla Mujeres. Although small, at about four miles long and only a half-mile wide, Isla (as the locals call it) has developed a legion of loyal, seasonal snowbirds. It also supports a significant number of full-time expats. About eight miles off the coast of Cancún, the island is served by a fleet of modern, high-speed ferries, which shuttle passengers and supplies to and from the mainland every 30 minutes or so.

“The weather is outstanding,” Gary says. “The beach is one of the best in the world, and it’s close to our apartment. We rent a small, one-bedroom apartment in a secure building. All utilities are provided, and while basic, it’s very affordable. Depending on how we want to live, our monthly expenses run between $2,000 and $2,500 per month, all in,” Gary says. “We even have official senior discount cards that provide a customary 10 % savings at many restaurants, as well as reduced rates on ferry tickets and numerous other things,” he adds.

Mexico’s cost of living, even on a Caribbean island, is generally about one third to one-half the cost of living north of the border. A doctor’s visit may cost $15 to $25, and dental procedures are generally one-third the cost of similar procedures in the States. Medications cost only a fraction of Stateside prices, and a doctor’s prescription isn’t required for most medications. In fact, many major pharmacies offer a free doctor’s consultation in an adjoining office.

Fruits and vegetables are fresh, readily available, and cheap. An entire week’s supply costs around $5 to $7, and street vendors will gladly prepare a fresh coconut, papaya, or mango cup for about 25 cents. You may even grow used to chili powder and fresh lime on your fruit, which is a traditional way to eat it in Mexico.

With winter temperatures of 75 F to 80 F and ample sunshine, Isla Mujeres provides a very comfortable winter and allows long days on the beach.

“We do enjoy going to the beach with friends, and we love socializing,” says Gary. In fact, Gary and Mary Beth say their social life on Isla Mujeres is their favorite part of the winters.

Gary and Mary Beth love the food on Isla. “The food is excellent, and the options are plentiful. You can get the typical American fare if you wish, such as pizza and hamburgers, but seafood joints are everywhere, and more restaurants are opening all the time,” Gary says.

One big advantage of snowbirding on Isla Mujeres is its proximity to Cancún and the rest of Mexico’s culturally rich Yucatán Peninsula.

“If we want to get off the island, the mainland offers countless cenotes (fresh water sinkholes, many suitable for swimming) to explore, historic Maya ruins, and rich, colonial cities such as Mérida,” says Gary.

Gary and Mary Beth also involve themselves with local charity work. “We’ve participated with a group that raises funds for medical facilities on the island.”

Isla Mujeres does have a small, community hospital. And nearby Cancún offers six major hospitals, as well as an international airport and other services that aren’t readily available on Isla.

“It takes a little time to adjust to the slower pace of life on the island, but it’s well worth the effort. Everyone is very friendly and it’s easy to get into the social life,” says Gary.

Mexico: Colonial and Beach Havens 90 Minutes From the States

I Can Work From Anywhere…So I Chose Low-Cost Mexico