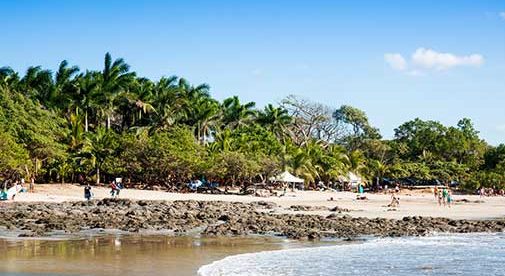 Avellanas (which means hazelnut in Spanish) is a virtual paradise tucked away 30-minutes south of the bustle of Tamarindo, on the Nicoya Peninsula. Ask any surfer in the province of Guanacaste if they know of Playa Avellanas and you will get a resounding, “Por supuesto” (of course). But ask the multitude of tourists in the region and you might see mostly head scratches.

You might be hard pressed to find a hazelnut in Avellanas, but what you will find, is arguably one of the most enchanting beaches in the area, surrounded by the wilderness of mangroves, dry forest and scrub trees.

The long strip of beach wraps north up the coast about eight miles to Playa Langosta, just south of Tamarindo. If you are interested in a long beach hike, it makes for a fun day trip from town. Some stretches are rocky and feature tide pools, other parts have powdery white sand and turquoise water. The beach gently slopes into the Pacific with few underwater lava rocks, making it nice for bathing.

The road to Avellanas is unpaved giving the traveler a true “off the beaten path” experience, to say the least. Eventually you will arrive upon this Garden of Eden, where forest opens to the stunning white-sand beach, and the hypnotic sounds of the waves.

Without the aid of census numbers, it is hard to gauge the population of Avellanas. However, it is safe to say a number somewhere less than 100 residents is realistic. There are probably more hotel rooms and cabinas in Avellanas than homes, as the population increases in high season, from mid-November through April.

Like many of the beaches on this stretch of the coast, Avellanas was first “discovered” by the surfing culture of the 1970’s and 1980’s. Surfing aficionados will tell you it is one of the best locations in all of Costa Rica. There are five surf spots in Avellanas; seasonal La Purruja, El Parqueo for less experienced surfers, El Palo for both left and right breaks, and the surfer hangout of El Estero. However, seasoned surfers in the know prefer to surf the northernmost break known as “Little Hawaii”. There, extraordinary offshore waves can reach up to 18 feet, making it ideal for experienced surfers from around the world.

As word spread about the fantastic surfing options in Avellanas, an expat couple discovered this idyllic location and decided to call Playa Avellanas home. They opened a large laidback, tourist-friendly open-air restaurant on the beach in the 1990’s (living in a tent while building it).

They became local celebrities of sorts, bringing tourism to the community and putting Avellanas on the map. But the true tourist attraction was Lola, the 800+ lb. pig who joined their family and became the town’s mascot. Today Lola has been replaced with equally the unforgettable (and sizeable), Lolita – who lives in a large pen on the restaurant grounds and can occasionally be spotted parading across the beach for a swim.

Unlike Tamarindo, Avellanas has managed to maintain its rural roots, humbly connected to their undiscovered past. There is no town center in Avellanas, which is unusual compared to traditional Costa Rican community designs. You will find no major grocery stores, clinics, banks, or commerce per se. There is a little market, a few small eateries, surf schools, and Lola’s. Of course, for folks who want to be “off the grid” or just surf, there are several small eco-hotels in the area. Around 10 years ago, a bridge was constructed over the mangroves making the trip easier and protecting the delicate ecosystem, but it has not brought hoards of tourists and expats.

Before the real estate bubble burst in 2008, there were several developers who targeted Avellanas as the next best place to build, since for many, Tamarindo was very popular. However, as history would have it, many real estate projects in the region came to a halt and Avellanas avoided any major mass development.

The residents of Avellanas are a closely-knit community consisting of a mix of Ticos and expats, who share a trailblazer spirit. They are open to new ideas but are passionate about protecting the area’s natural resources and pristine beauty. They chose to live there for its tranquility and safety. The locals will tell you it is the perfect place to raise a family or retire.

Although real estate is limited, you can still find a modest two-bedroom, two-bathroom home for $115,000 here. If you want to be closer to the beach, prices for a two-bedroom, two-bathroom home in a six-home complex with pool, will cost you about $225,000. There are very few apartments and condo complexes, and rent varies from $950 to $1,200 per month.

Here is an example of a monthly budget for a couple renting a home in Avellanas:

If you are looking for a tiny beach community which is big on beauty, tranquility, and safety, Avellanas may just be the “hazel”nut to crack.

5 Great Places for a Golfing Retirement

Pros and Cons of Retiring Abroad