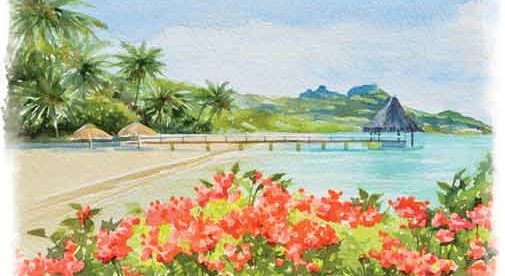 The ancient Polynesians traveled among thousands of tiny islands and atolls across the Paciﬁc in double-hulled sailing canoes.

Using celestial navigation, an intimate knowledge of tides and currents, and following the ﬂight patterns of birds, their reach stretched to Rapa Nui (Easter Island), according to some experts.

Others maintain they made it all the way to mainland South America.

These days you can travel to the fabled Paciﬁc islands of Polynesia, Micronesia, and Melanesia with ease—on a jet. From luxury resort living to a simple village existence, you can enjoy a relaxed island lifestyle against a backdrop of verdant mountains, steamy jungles, white-sand beaches, and clear turquoise waters. You can enjoy an outrigger canoe ride or feast on pit-baked pork, indulging in the ﬁner points of a distinct cultural heritage. And with reasonable rentals available, even a stay in the islands won’t break the bank.

Not to be confused with American Samoa (a U.S. territory) next door, Samoa is an independent nation with a focus on preserving its vibrant, 3,000-year-old local culture: the Fa’a Samoa (the Samoan Way). Don’t miss a Fiafia Night, featuring traditional food and fire knife dancing.

There’s excellent diving, thanks to vibrant reefs just offshore. And those same submarine formations have given rise to perfect reef breaks that, due to its relative youth as a surf destination, mean you’ll have the waves almost to yourself. Elsewhere, the rugged, mountainous interior is marked by deep gorges and waterfalls. Of course, if you just want to lounge in the shade of a palm with a good book, that’s fine, too.

There are two main islands. One of them, Savai’i, boasts a studio bungalow at a waterside resort that rents for $744 a month, with free use of kayaks included. There’s also an on-site restaurant and bar.

Alternatively, near a large rainforest preserve in a traditional seaside village—replete with friendly local neighbors—is a two-bedroom home for $1,658 a month. See: Airbnb.com.

In popular culture, Bora Bora is the quintessential island paradise in the South Pacific. And for good reason. This 15-square-mile jewel of the Society Islands is surrounded by sandy barrier islets called motus, and it features a lagoon in a dozen shades of green and blue, ringed by a coral reef teeming with sea life. You’ll see many over-water bungalow resorts along the shore here.

You can stay right on the lagoon in a two-bedroom bungalow, with views over the water, for $1,505 a month. For $1,612 you can rent a one-bedroom apartment in a local neighborhood near the largest city, giving you quick access to the whole island. See: Airbnb.com.

Some say it has the most beautiful beaches of this 83-island archipelago. The setting for Rogers and Hammerstein’s musical South Pacific was based on Santo, so it’s no surprise that you can come across a lot of World War II remnants when you dive in the surrounding waters. You can also go deep-sea fishing, charter a sailboat for a sunset cruise, or just enjoy a cold drink on the beach. For $837 a month, you can rent a studio apartment across the street from the water. Just a short water-taxi ride across from Santo’s main city, Luganville, is a two-bedroom waterside home for $1,508 a month. The island also has Vanuatu’s best reef dive. See: Airbnb.com.

Vanua Levu, Fiji—A Tropical Haven in the Heart of the South Pacific

The Melanesian island country of Fiji is among the most visited South Sea islands. Revered for its white-sand beaches, tropical rainforests, and vast coconut plantations, Fiji has 106 inhabited islands. Two of these, Viti Levu and Vanua Levu, house the vast majority of the population. It’s a great place to be active, as the reefs offshore are habitat to 1,500 species of fish, and the island itself is a paradise for bird-watchers and naturalists. If you’re a golfer, this may be your dream spot. There are 14 18-hole golf courses scattered over the archipelago, including three championship-level courses.

The lasting influence of Indian migrants, brought to the nation by British colonial rule at the end of the 19th century, is unique to Fiji. Making up about 38% of the population, they’ve had an impact on politics, religion, culture, and cuisine—roti (a type of flat bread eaten with curry and other dishes) is very popular.

On Vanua Levu is a mountaintop, two-bedroom home with dramatic views over the hills and Pacific for $1,470 a month. See: Airbnb.com. A three-bedroom hillside home surrounded by lush, tropical landscaping and views over Savusavu Bay is listed at $1,450 a month. See: Longtermlettings.com.

The Port of Refuge, on Tonga’s Vava’u Island, is a popular haven for blue-water sailors exploring the South Pacific. Many “yachties” anchor here for extended stays from June to October, or at countless hidden coves in the 60 surrounding islands.

They follow in the wake of explorer James Cook, who first visited what he called the Friendly Islands in 1773.

Here you’ll find deserted beaches, clear lagoons, and undersea coral gardens. Good news for divers: Visibility is about 100 feet. You can even swim with migrating humpback whales, who call the islands home from June to November.

The town of Neiafu runs along the harbor’s edge. As the main administrative center—and largest town, with 6,000 residents—of the Vava’u island group, there are plenty of services here, including medical care. The town’s waterfront features a lively selection of restaurants and ramshackle bars.

With views over the crystal waters of the Port of Refuge, a fully furnished, three-bedroom home on the edge of Neiafu is available for $723 a month. About a 15-minute walk from town is a three-bedroom furnished home with large terrace offering panoramic views of the harbor for$678. See: Vavauholidayhomes.com.

The dark, primeval forest of old Europe was a source of terror and myth. Recall the fairy tales of Hansel and Gretel and Little Red Riding Hood… Bears and wolves, even bison and aurochs, ranged freely. Vast tracts in central and eastern Europe were nearly impassable.

Eventually, the vast woodlands that covered much of Europe were cut down for firewood and to make way for livestock and pasture.

Hunting by the nobility eradicated much of the wildlife. Yet some pockets of virgin forest, ﬁlled with ancient trees, still remain, often protected as national parks or by international agreement.

The village of Cisna, in Poland’s southeastern corner, is a gateway to the Bieszczady Mountains, one of the wildest parts of the country. Depopulated after World War II, much of its rough terrain has reverted to nature.

Here you can ﬁnd a three-bedroom cottage embedded in just over a half-acre of forest land for $69,621. See: Polish-house.com.

Set in the High Tatras, the highest part of eastern Europe’s Carpathian Mountains, is a cozy three-bedroom wooden cottage deep in the deciduous forest of Slovakia. The home, offered at $85,851, is at the base of Bear Mountain, known for its active populations of golden eagles, red deer, and, of course, bears.

(There hasn’t been a fatal attack in over 100 years.) It’s a protected area and still wild, where the mountain slope meadows—snow-covered in winter—become rainbows of buttercups, forget-me-nots, and bellﬂowers in spring. See: Tatranetreal.ru.

In Germany lies a renovated, former hunting lodge surrounded by forest in the Mosel Valley.

Enjoy views over the famous Riesling vineyards that slope to the river from one of the three terraces or two balconies in this ﬁve-bedroom home. It comes fully furnished and includes a sauna and private tennis court. The nearby picturesque village of Pünderich offers shopping and dining options, and the major city of Frankfurt is down the road. The property is on offer at $582,055. See: Rightmove.co.uk.