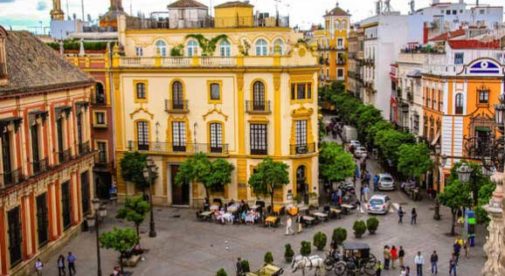 In 2004 Karen McCann, now 63, and her husband Rich, 71, embarked on a year-long adventure in southern Spain. The newly retired couple had always loved the idea of living overseas, so they decided to try it for a year, making a home for themselves in sunny Seville.

“We got here, and it was like, ‘Oh my God, we really like this,’” says Karen. “It’s so much like California—the weather, the Spanish speakers, the palm trees. We were comfortable with the whole atmosphere.

“We kept our place in Ohio and told people we were going for a year…but six months in, we looked at each other and said, ‘We don’t want to go back.’”

So the couple sold their large Ohio home, cleared out 20 years’ worth of possessions, and planted themselves permanently on Spanish soil.

Lying at the heart of sunny Andalucia, Seville is one of southern Spain’s most beautiful cities. Waves of conquerors, from the Romans to the Moors, have left their stamp on its spectacular architecture. Thousands of tapas bars line the streets, and the warm Spanish sun nurtures parks full of palm trees. It’s known for its mild winter weather (temperatures never drop to freezing, while summers rarely dip below the mid-80s F).

When asked why she loves Seville, Karen raves about the vibrant and affordable social scene, as well as the great food.

“I think the first thing that struck me was the vibrancy of street life here”, says Karen. “Everybody dines out. Tapas, drinks…there are allegedly 3,000 little bars in the city. People here take their social lives as seriously as Americans take their business lives.

“Seville has an amazing food scene. Costs vary widely, but typically we spend under $30 per person for a good meal with wine. A lot of the bars have super-cheap beer. The cheapest in town is just 45 cents and the average is about $2 for a beer and $2 for a tapa.”

Beer and tapas aren’t the only things that are affordable in southern Spain, according to Karen. Housing—particularly for renters—is a good deal. And the overall cost of living is comparable or less than their costs in the States.

“Overall,” Karen says, “our cost of living is about the same as Cleveland. We spend more on travel and a lot less on food, going out, and entertainment. We don’t have a car here, so we save on that, because in Seville we can walk everywhere… And our rental is a fabulous deal. We pay far less than we’d pay in any city in the U.S.

“My Spanish friends pay about $530 to $640 a month for modest places on the outskirts. The normal cost is $850 to $1,000 in a more central location, but that depends on things like balconies and garages. This is for a one- or two-bedroom.”

Another great deal, according to Karen, is private health insurance. And not only is it affordable, but the quality is good, especially for primary and secondary care.

She says, “When I first moved, my doctor in the States told me my cholesterol was high. I wanted a second opinion, so I went to a private clinic here in Seville. It was only a five-minute wait. The doctor took my records himself… And then told me my cholesterol is a little high, but we can make a few dietary changes…basically, drink more red wine, eat more dark chocolate.”

The couple’s private insurance, through Sanitas, a subsidiary of the global provider Bupa, costs them around $530 a quarter. They’ve selected outpatient coverage only, which includes house calls and private clinics.

Looking back, Karen says the move has changed her in a profound way, and worked wonders for the couple’s retirement.

“Moving here has revitalized my life in a way I didn’t expect. I thought it would be fun and interesting and stimulating…but I didn’t think it would transform me. Yet I feel like a new person.”