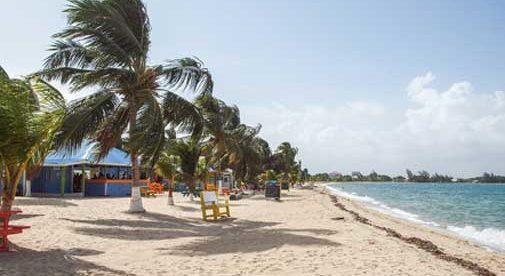 When the Caribbean seascape is the backdrop to daily life, things naturally move a lot slower. Whether relaxing in a hammock under a gently swaying coconut palm, or strolling over miles of golden-sand beaches and looking out at the waves crash against the Mesoamerican barrier reef, when you’re in Belize, living life in the fast lane simply isn’t an option.

However, even in a sleepy country like Belize, with its hundreds of postcard-perfect cayes (islands) and Mayan ruin that have lasted for millennia, things don’t stay still forever.

After record-breaking numbers of tourists in 2016—when tourism increased 13% over 2015’s 6% growth—and with 2017 month-on-month arrivals showing at least a 9% jump or more since 2016, it’s clear which way the trajectory is going. Each year brings more and more tourists and expats. And with each increase comes a higher demand for more services, cafés, restaurants, entertainment, and luxury.

Nothing about this growth is unexpected. In fact, Belize is only now seeing the numbers of tourists and expats it would have seen decades ago if it had the right infrastructure in place. In Placencia, a stunning 16-mile peninsula in southern Belize, the one road into town was only paved in 2011, after which the town began to boom. In the last two years there have been no less than 10 new direct flights to Belize from Southwest Airlines and several Canadian carriers. The Belize International Airport just doubled in size to accommodate these new arrivals.

Despite all this growth, huge demand still remains for the day-to-day services that are expected from a popular Caribbean destination. This is particularly true for the expat community, who have settled in Belize for its pristine beaches, natural beauty, low cost of living, relaxed pace of life, and focus on outdoor living—but still desire the comforts and luxuries of home.

In Placencia, a funky, artistic, and welcoming place, where you are never more than a few steps from the sea, expats are thriving in businesses such as yoga and art studios, restaurants, B&Bs, and other tourism-driven business like golf cart rentals or tiki bars. But the intensifying demand for more services is now manifesting most visibly with the recent opening of North American-style comfort food establishments. Chris Rothing, who has been living in Placencia for several years, recently opened Sindwinders, where he’s cashing in on his own love for an American classic. “I have always been a sandwich lover and have been making them for friends for years. A killer sandwich was one of the few things I missed while living here in Placencia, as there really was no true sandwich shop. I also have a love of creative, homemade flavors. At Sidewinders, I have done my best to combine the two.”

For Chris, the low costs were one of the deciding factors when he was considering starting a business in Belize. “Rent is certainly significantly lower than in the U.S. Labor also can be extremely affordable, as the cost of living here is much lower.” In fact, the minimum wage is Belize is just $1.75 per hour for unskilled labor, and around $3 per hour for skilled labor.

But perhaps an even more significant reason why Belize is attractive to expat entrepreneurs is the familiarity it offers. Not only is it an English-speaking country but, like the U.S., it’s based on British law. This gives investors a piece of mind and security about opening and maintaining a business here. They don’t need interpreters in order to read contracts, and fulfill legal requirements, and they automatically have a basic grasp of the law, which is very similar to U.S. law.

Heightening this opportunity is the fact that Belize is just starting to introduce regulations that have been present in the U.S. for decades. For example, the Belize Tourism Board is now implementing hospitality standards such as use of white linens in hotels. When entrepreneurs come from the U.S., they find that their minimum standards can exceed the typical expected standards in Belize, and therefore their service offerings are much more attractive to tourists and expats.

How to Trade Your Photos for Cash