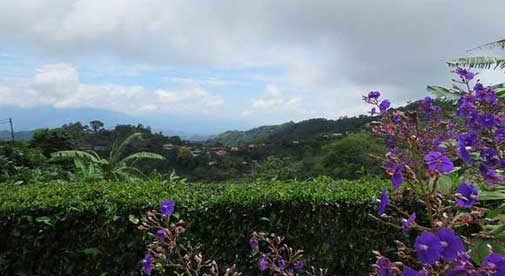 Walking into my Tai Chi/Qigong class this morning at the Atenas Yoga Center, I was greeted by several new smiling faces. There were new expats in town, renting a house for a few months to check out whether Atenas, Costa Rica, could be their new home.

That’s a pretty common occurrence here, where out of a population of around 27,000—including all of the satellite neighborhoods—more than 1,500 are full-time expats. People from all over the world, seeking a new and better place to live, have relocated to Atenas, which provides an easy infrastructure and a community that welcomes other expats. And local Costa Ricans in the small, rural coffee and ranching town are just as welcoming and friendly.

People love living in Atenas for three key reasons. To start, the great location on the western end of the Central Valley gives the town strategic proximity to the capital city of San José (less than an hour away) and beautiful Pacific Coast beaches, also less than an hour’s drive away. The San José international airport and larger cities like Alajuela or Escazu are only 30 minutes east. However, Atenas is far enough away from the city that it maintains its friendly, small-town feel, and with elevations between 2,200 and 4,000 feet, its mild temperatures mean it’s not sweltering enough for air-conditioning or cold enough to need heating. The town’s slogan is “The Best Climate in the World.”

Most of the expats in Atenas are retired, but there’s plenty to do to keep you occupied. There is a monthly book club, a weekly Buddhist meditation group, a women’s club, an artists’ group, and a men’s group that holds events, games, and outings to name just a few. The Atenas Yoga Center, at Hotel Colinas del Sol in town, offers yoga and Tai Chi/Qigong classes several times a week. Besides that, there are several gyms, Zumba, and aerobics classes, and a CrossFit outdoor training center. Hiking and mountain biking trails abound in the mountains that encircle the town.

If you don’t speak Spanish yet, don’t worry. You can join a group Spanish language class at the Su Espacio Cultural Center or take private tutoring with fantastic instructors in town. There are several Atenas expat Facebook groups, and plenty of volunteer opportunities with the local animal rescue foundation Animales Atenas, at the Atenas nursing home, or the children’s orphanage. For fun, the expat rock band Flashback performs live music regularly at local bars and restaurants—always a packed event.

Atenas has one of the best weekly farmers’ markets around, where for about $30 you can fill your refrigerator with fresh fruits and vegetables, plus buy a home-baked cinnamon loaf to have with your purchase of organic Atenas-grown coffee from El Toledo. For regular shopping, while there are many stores and markets in town, you can’t beat the marvelous CoopeAtenas Supermarket that’ll remind you of supermarkets back home. Management really makes an effort to offer services like a big parking lot, a café in front that serves as a nice meeting spot where you can grab a coffee and pastry, a light sandwich, or a cold ice cream on a hot day.

If you’d rather dine out than cook, there are plenty of restaurants in Atenas where you can get a great meal for under $20 a person with drinks, tax, and tip included. One of my favorites is Pizzeria La Finca. You can get a large, gourmet thin-crust pizza that easily feeds two for about $13. They also have fresh pasta and salads on the menu, and one of the best craft beer selections in Atenas.

Another popular expat hangout in Atenas for the past 10 years is Kay’s Gringo Postres, recently taken over by new Canadian owners. Centrally located by the Atenas health clinic, Kay’s is well-liked for breakfast, lunch, and afternoon coffee.