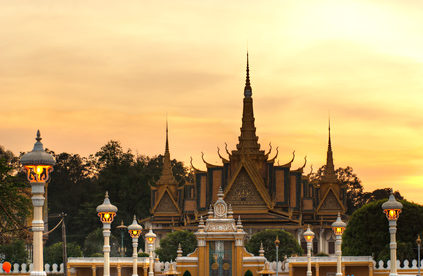 Jennifer and Elisa recognized Cambodia as a country with potential and promise. ©MasterLu; Fotolia.com

Jennifer and Elisa were living in the Cambodian capital, Phnom Penh. Both were aspiring entrepreneurs, and both were on the look-out for a business idea.

Elisa had lived in China before moving to Cambodia in 2006 with her family. Jennifer, meanwhile, moved to the Southeast Asian country in 2001 with her partner and two children.

Jennifer had worked in the tourism industry for years. She wanted a new challenge.

Cambodia was just starting to recover from the devastating rule of the Khmer Rouge. Although at the time there were rumors of remnants of the brutal ultra-Communist regime still hiding out in the jungles to the North, both women recognized Cambodia as a country with potential and promise. Those willing to take a risk could reap the rewards.

One day, Elisa was shopping in a market. She spotted a roll of discarded net on sale. Then she tripped over a black plastic bag. These seemingly non-consequential events sowed the seed in Elisa’s mind for a business. Something beautiful could and should be created from the useless materials left lying around.

With Cambodia finally coming into its own, but with little infrastructure and no recycling whatsoever, there was plenty of discarded material around for her to experiment with. That same day she transformed a room in her house into a small workshop, and her children, with tears in the eyes, said good-bye to their playroom.

A chance meeting at a children’s play date some months later resulted in Jennifer and Elisa’s meeting of minds. When Jennifer saw the prototype bags and purses Elisa had made from discarded materials, it was love at first sight and she immediately began drawing up a business plan.

The pair started out with very little money and a heap of ideas. Soon, they had a team of three tailors and a shop/workshop. Both women were in their element. Elisa was finally getting to use her creativity and Jennifer was trying her hand at running a company. Something neither of them had attempted before.

These days, Jennifer runs the daily operations and the commercial part of the company from Phnom Penh. “Smateria” now has four shops in Cambodia and exports to 10 different countries.

Elisa moved to France in 2009 from where she manages a production team of some 60 tailors in Cambodia. She flies to Cambodia as often as possible to work on research and new product development.

Elisa and Jennifer continue to learn every day from their inspirational Cambodian team. To work alongside Cambodian managers, men and women who were formerly exploited workers without rights or a future, confirms for Elisa and Jennifer that their dream has definitely become a reality.

Editor’s Note: Being your own boss doesn’t have to mean setting up a hands-on business like Elisa and Jennifer. Here’s a simple way of securing a steady income from wherever there’s an internet connection.