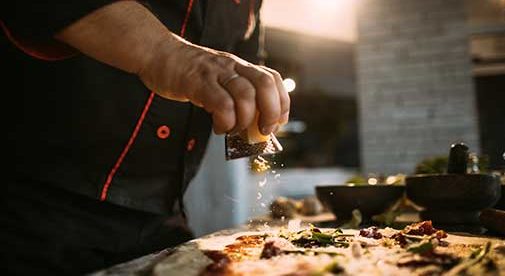 “Pizza is universal. Everyone understands it. Most people love it. It’s relatively easy to make, and anyway, it was my wife’s idea,” says James Devos.

James never imagined himself running a pizzeria in small-town Thailand. To be fair, not many people would think of such a thing. But in 2013 he met a nurse’s assistant named Ploy, from Ban Pong, Ratchaburi, about 50 miles west of Thailand’s busy capital, Bangkok.

Cupid’s arrow struck, the couple married, and as James approached his mid-40s, the idea of moving abroad for an early retirement began to creep into his thoughts. “I had been working hard since my late teens on houses and cars and those early morning aches and pains began. I started to think about working to live, not living to work,” he says.

The two took a hard look at their retirement savings and talked about how far it might take them in Thailand. At first James didn’t believe the numbers.

Once not much more than a train station, a temple, and a few small shops, the small town of Ban Pong has grown over the years to become self-sufficient and modern, while maintaining its traditional rural Thai atmosphere.

“Before we opened the restaurant, I don’t think we would go through more than $320 a month, all told. Ploy would take me to the fresh market in the morning and load up bags of stuff—food for the whole extended family—and it would be $10 or $15.

“We were looking for a small-business idea that would be simple to set up and run, but also would have some growth potential and even be a bit of fun. Pizza is a simple food in theory and it’s trendy in Thailand. Since there really is no foreign population to speak of in Ban Pong—just a few teachers—I wasn’t sure how we were going to make a pizza-and-wings shop work. But so far, it’s all right,” says James.

The restaurant is at street level on a wide road populated by other restaurants and outdoor nightclubs. Opposite is a park, with a small outdoor fitness center and a pathway running along the Mae Klong River. “Ban Pong is a pretty small place, but this road has all the action in the evening and night,” says James. “And when I have some time, I can walk five minutes and cast a line into the river across the road.

James says that the restaurant is fairly quiet, and fairly regular, but on weekends it gets busy.

“It can be hectic when the nightclubs are full and people get hungry. I think everyone is starting to understand that nothing goes better with cold beer than pizza.”

As Bangkok grows larger and larger, even the little village of Ban Pong, over 60 miles away, feels the effects. But it seems that the laidback and traditional way of life here is resistant to any significant change, for now.

The small town still has that sense of community that helps things along in rural areas. It seems like a timeless way of life, and it looks as though it’s set to stay that way.

Ploy says that when she was a young girl, everyone in Ban Pong worked together during rice and sugarcane harvesting season. All the neighbors shared fish and supplies while the work was done and there were no such things as private parties. “Some of that has changed,” she says. “Not too many people work in the fields anymore and not many people have to catch fish to eat, but people still want to help each other.”

James adds, “The air is clean. The pace is slow. The people are polite and friendly. It’s small-town life, and that’s what we like.”