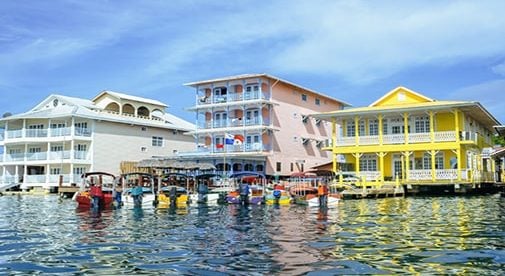 Roger and Danielle Eggleston swapped careers in high-end hospitality for their own beach bar in a tropical paradise. “Now, we take a boat to work instead of sitting in traffic,” says Roger.

The couple lived and worked all over the world before relocating to Panama. Roger is a former chef who worked in Michelin-starred restaurants while Danielle is a sommelier and bar and restaurant manager.

They chose to settle in Panama because of the climate, the use of the U.S. dollar, and the abundant business opportunities. “A surfer friend suggested visiting Bocas del Toro,” says Roger. “We saw the investment potential. We bought land and opened our bar on an island called Isla Vista Tranquila.”

Bocas del Toro is a nine-island archipelago in the Caribbean Sea. Long popular with surfers and backpackers in search of an affordable beach escape, Bocas also has a thriving retiree expat scene. The couple live near Isla Vista Tranquila on a separate 1-acre island. On a clear day, it takes them about 10 minutes to boat to work. Sometimes they see dolphins on the way.

“Bocas has exploded in the past four years,” says Roger. “There are seven big grocery stores and there’s more variety than before. There’s also a new hospital and the airport is expanding.”

Since its launch, their bar has grown into a popular expat hangout. They offer discounts for locals, who provide vital custom during the tourist offseason. The location also serves as a local community hub. “We recently had a giant karaoke fundraiser for a local girl who needed lung surgery,” says Roger. Getting the business to this point took determination. “For three months, I slept at the bar. Completely renovated the whole place. There was no kitchen,” says Roger. “Before, the place was four concrete pillars. We built the whole place. We even built the furniture.”

Their goal in designing the bar was to give it an upscale feel while maintaining the Caribbean beach vibe. Roger and Danielle aim to attract everyone from high-end tourists to backpackers, though value for money is a core commitment. The most expensive item on the bar food menu costs $8.

The couple’s home on a nearby island is made of treated pine and offers panoramic views of the Caribbean Sea and the mountains on the mainland. It cost $60,000. They have three rescue cats and have inherited dogs. “We wake up calm and peaceful,” says Danielle.

During the day, the couple work on their home. “We can tell how busy the restaurant will be later because all the tour boats go by our property,” she says.

In terms of obtaining work permits and visas, the Egglestons note that the entire process was fairly simple. “We’re here on the Friendly Nations Visa, which makes it easy for U.S. citizens to move to Panama,” says Roger. “We did the entire residency process in Panama. We have our own corporation, which owns the land. We were eligible for a 20-year tax break. We’re residents for life and have bank accounts here. For the ease of doing business and being able to work, Panama’s a good option.”

We’re Downsizing to an Affordable, Stress-Free Life in Tropical Panama

Expats Build Businesses And Share Their Passions At A Panama