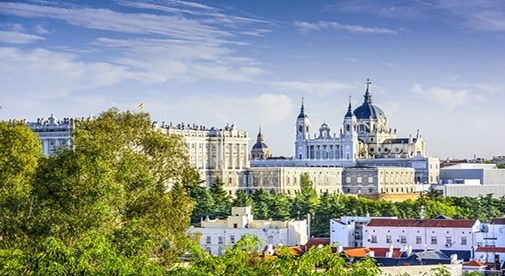 Even compared to other European capitals, Madrid stands out for its vibrant cultural and artistic scene. ©iStock.com/SeanPavonePhoto

Brooklyn-born Ashton Dorminvil shares Indian food with friends at a sidewalk café in Madrid‘s hip, multi-cultural neighborhood of Lavapies. After a spicy, laughter-filled meal, more friends meet him at a nearby bar for craft beer.

“Madrid is incredibly social, and the opportunities are limitless, especially if you identify as LGBT,” says Ashton. “Although NYC is known for being a hub of gay culture, Madrid has a more open, visible, and festive spin, with a more liberating feel.”

After earning a B.S. degree in biology from City College of New York in 2014, and after working in a physical therapy practice New York, Ashton was looking for something different. “My hunger for a challenge and to experience something outside of New York grew stronger and became harder to ignore,” he explains. He took a course to learn to teach English to adults and got a CELTA certificate. “A year later I was on a plane to Madrid.”

Ashton found his teaching opportunity through Spain‘s auxiliare program, which is designed to bring native speakers of English into Spanish classrooms to provide conversation practice for English-learners.

Now Ashton teaches high-school English, as well as biology, physics, chemistry, and drama in English. For 18 to 25 hours of teaching per week, he earns around €1,200 (approximately $1,340) per month for 10 months (summer vacation is unpaid). “Spanish life in general is slower-paced and laidback. Time seems to be in abundance, and the weather is always good.”

In his spare time, he takes yoga and acting classes. “They help keep my mind fresh and creative while in the classroom.” He is also a work/study student with a non-profit organization called MindBody Society, which will lead to a yoga teacher-training opportunity in 2020. He teaches some private English classes and works as an English-immersion camp counselor for high school students during the summer break.

Ashton lives in Lavapies/Embajadores, which was called the world’s coolest neighborhood by Time Out in 2018. By sharing an apartment, he keeps his living expenses around €600 ($670) a month, which gives him enough discretionary income to travel around Europe during school vacations. “The Spanish take their holidays quite seriously. So, when in Rome… I have visited Salamanca, Candeleda, Valencia, Barcelona, Almeria, Granada, Berlin, and Morocco. I’ve got plans to make it to France and the Netherlands soon.”

For North Americans who are considering working as teachers in Spain, Ashton advises, “Come here with an open mind because you never know what you’ll get.”

He adds, “North Americans are taking Madrid by force (creatively, that is), bringing over so many projects for small businesses, art, music, theater, and dance. It’s a great place to sort out your ideas and try something new with a very receptive audience.”

Ashton wants to stay in Spain as long as legally possible. “If an opportunity arises to be here beyond my visa, I’ll gladly accept it. I arrived saying that it would only be a year. Here I am almost three years later, speaking Spanish almost fluently. It’s rare to meet an American who has been to Spain and hasn’t said ‘I’m in love.’ I hope my love affair with Spain will continue.”

Living Off The Land In Low-Cost Alpujarra, Spain

Work Less And Live More On The Island Of Mallorca