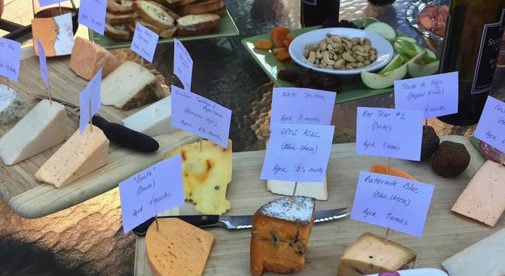 Contrary to what you may think, retiring does not mean withdrawing from activity. In fact, it’s just the opposite. Since moving to Costa Rica, without the daily pressures of a job, I am now free to fill my time as I want, and I do that in so many ways. One of my favorites is making artisan cheeses.

Cheesemaking was something I had a lot of interest in doing when I lived in the U.S., but that I never had the time for. Upon moving to Costa Rica’s Orosi Valley though, I soon realized aged cheeses are not something that exist here. And, saying goodbye to Gouda, Edam, Gruyere, and yes, even Cheddar was not something I wanted to do. So, I immediately said hello to my new hobby, cheesemaking.

To that end, building a goat barn and getting a couple of those rascally impish goats was one of the very first things I did after making the move to Costa Rica.

I started by making simpler, fresh cheese like Chèvre, but after I found my feet I quickly moved on to trickier cheeses like Brie and Camembert. Common hard cheeses came next, followed by “stinky” cheeses like Munster and Taleggio. Lastly, I graduated to blue cheese. Blue cheese is a love it or loathe it, kind of cheese but everyone recognizes that creamy paste with the pockets of blue-green piquant. (I happen to be in the “love it” camp.) Over time, I branched out and made less common but equally famous cheeses like Manchego, Feta, Asiago, and Emmentaler.

While I still make my favorites like all those I mentioned above, I also now make artisan cheeses that are truly one-of-a-kind and only available right here from our little creamery—Dos Cabritas del Rio Oro.

The basic process for most cheeses is the same: warm the milk, add certain bacterial cultures, consolidate the curd, press it, age it….and voila, you have cheese. But don’t be fooled; that process takes all day long and even the subtlest variations in any of those steps result in drastically different cheeses.

Aside from the gastronomic pleasure my husband Michael and I get from having 30 or so different cheeses at our fingertips all the time, I also have the delight of being able to provide it to some forlorn expat who might be longing for that elusive sliver of holey Swiss cheese. And as it turns out, my yummy pastime has become a lucrative small business too. I even have a cheese monger nickname—The Cheese Man.

I invite you to watch the short video I’ve prepared that guides you through my cheesemaking in only two minutes, a literal farm-to-table experience.