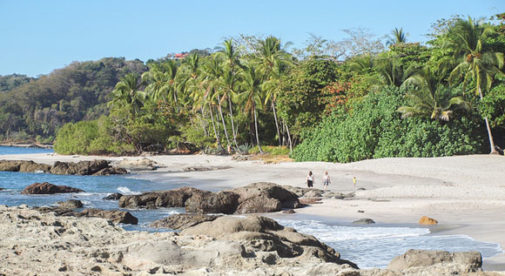 On the far southern tip of Costa Rica’s Nicoya Peninsula is the tiny town of Montezuma.

After hearing it described as a “must-see” from friends and fellow travelers for years, I decided to check out this gem on the Pacific.

And I have to say…I think all the Montezuma fans have a point.

The biggest attraction? The beaches no doubt. The white sand meets blue water—safe for swimming in spots, better for surfers in others—but always beautiful to look at. In some sections, jagged rocks jut from the shore creating pools teaming with sea life when the tide is right.

A unique aspect of Montezuma is that its position on the peninsula means that it faces east. So unlike other Pacific coast towns you get a sunrise, not a sunset. Watching the sun come up over the water in the morning—nobody around except a few seabirds and a few other early risers walking their dogs on the beach—was a highlight of my trip.

The town center, basically a short, two-street intersection on the water, is a meeting spot for locals and a place to grab a lazy lunch in the shade to escape the tropical heat. On my trip, I had a made-to-order veggie sandwich on fresh-baked bread ($5) at a little cafe. It took a while to come out of the kitchen. But it was so fresh, I didn’t mind after the first bite.

Montezuma has a reputation as a haven for the bohemian crowd. The vegetarian restaurant with the sandwich was just the start. Yoga is huge here. Ads for spiritual healers compete with live music posters on bulletin boards.

The weekly Saturday morning market in the playground in the center of town is a can’t-miss. Organic fruits, vegetables, and herbs are on offer, as well as handcrafted jewelry incorporating semi-precious stones and even coral. Longtime expat residents—it’s a small group—greet each other warmly. As you shop, a local basket weaver strums his guitar. He seems more intent on playing traditional songs than making a sales pitch.

From the Central Valley (including the main international airport in San Jose), you catch a large ferry (it transports cars, trucks, buses, and people) from the central Pacific port of Puntarenas on the mainland and then drive another hour to get to town. (Of course, you always have the option of flying into the small airport—just an airstrip really—in nearby Tambor.)

Finally, many of the dirt roads around town and to other nearby beach communities are rough—some all but impassable in the rainy season.

Point is, you’re not getting in or out of Montezuma in a hurry. And most expats who’ve settled there like it that way.

Real estate can be pricey in this area thanks to growing interest from the jet set. But there are still plenty of good deals to be had. Right now, a three-bedroom, two-bathroom home, an eight-minute drive to the village and beaches, set among palms, flowers, and fruit trees, is $99,000. A two-bedroom bungalow—with a balcony overlooking a creek, located a seven-minute drive from the beach—will run you $960 a month to rent, fully furnished.