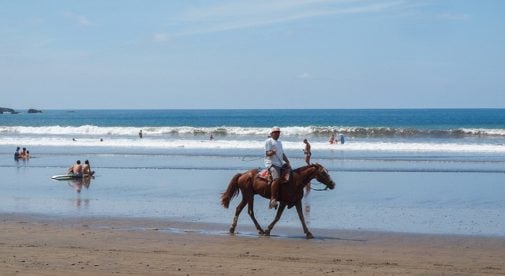 Jacó, which Jason Holland chose as the base of his scouting trip, is many people's first introduction to Costa Rica. Located around a 90-minute drive from Juan Santamaria International Airport in Alajuela, it's one of the oldest and best-known vacation spots in the country.

The Cambridge English Dictionary defines an expatriate as someone who does not live in their own country.

Certainly no expatriates I know have been forced to expatriate. They live somewhere besides their own country because they want to…because the weather is better, or the pace of life is slower, or the cost of living is cheaper, or they love the country and culture they’ve moved to, or they want to have an adventure. Or any combination of the above.

I’m thinking of this lately because I use the term “expat” a lot, and I know what I mean by it. I mean someone who has willingly found a better life for themselves outside their home country. They’ve become a willing expatriate.

But some people I talk to don’t share the same meaning of the word…they consider an expat someone who has either been kicked out of or has turned their backs on their own countries.

Most of these folks have never lived outside their home countries for any length of time and can’t imagine why they—or anyone else—would ever do so.

Even if they could cut their cost of living in half…even if they never had to shovel snow and chip ice again…even if they could get a lifestyle so relaxed that their blood pressure went down…even if they could immerse themselves in another colorful and interesting culture and see things from a completely different point of view. For them, having to go somewhere outside their home country amounts to some kind of betrayal. Something unpatriotic.

And that’s another way the word expatriate gets interpreted. People sometimes think that being an expatriate is the same as being an ex-patriot—a former patriot—as in, someone who no longer is a big fan of their own country. They sound almost exactly the same, and this can give rise to misunderstandings.

Patriotism can be a touchy subject, even among expatriates. There are endless conversations in expat bars, cafes, and hangouts around the world about what makes a patriot, and whether or not you can still be a patriot if you’ve willingly chosen to live abroad.

The obvious answer for me and almost every other expat I know is, a patriot is simply someone who loves their own country, and you can do that no matter where on the planet you actually choose to reside.

This may all sound like just a lot of useless semantics, but it can make a huge difference to expats and to the people they know and love back home. Especially in election cycles when opinions about politics back home can get strong, most of the expats I know want it to be very clear that they still have deep concerns for the welfare and future of their own countries no matter where they live…and that they still have every right to those concerns.

Which is why it can be important for expats to make that distinction in definitions and to be very clear about their status.

Sign up for our FREE report on the world’s top 10 Retirement Havens.

No spam pledge. We value your privacy.
Top of Page Click to go back to top of page