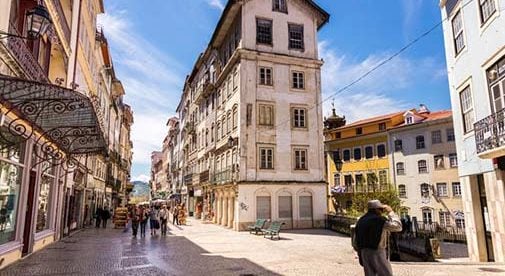 Right now, travel is off the table. But that doesn’t mean we can’t plan ahead…

Yesterday, I shared just a small selection of the destinations your fellow readers are planning to visit once the dust settles and planes are in the sky again.

There were some great picks in there. From San Miguel de Allende to the Amalfi Coast, and from Spain to Ecuador and Panama (I’m sharing more of your responses in the comments section below). I’ll be returning to many of these destinations myself once I can.

But there is one locale that dominated your dream itineraries. It appeared again and again in your emails. And truth be told, it’s near the top of my travel list too.

That’s what I want to dive into today…

If you haven’t already guessed, I am of course talking about sunny Portugal.

I’ve been visiting Portugal for close on two decades. Every time I go now, I’m impressed by the progress. Portugal is getting its act together and doing smart things…creating incentives and an environment that attracts mobile people, money, and business…the kinds of things that drive growth and create buying moments.

I’ve had some great finds there too. Like condos in the Eastern Algarve that Real Estate Trend Alert members could buy for €440 per month, after just €29,800 down (borrowing 80% at rates as low as 1.2%.) Members could buy ahead of the Path of Progress in Lagos…historic buildings in Porto where we could double our money by renovating and converting to apartments…and even apartments in the “Oxford of Portugal” for $50 per square foot…

This week RETA members are travelling together in The Algarve, Cabo, and Panama. These are what we call Member’s Only Scouting Trips (MOSTs). And they are the best way I know to find your dream home, or profit opportunity, overseas. Here are some of my favourite paces in The Algarve. I’m excited about returning in early May. Have fun fellow opportunity scouts…#internationalrealestate #realestatetrendalert #internationalliving

The Algarve appeals to a broad cross-section of tourists (including families), with tourism coming from across Europe, with Scandinavians, French, Swiss, German, and others, along with the British and Irish. I’ll tell you more about that in the moment…My plan is to buy in the Algarve so that I have a European base for the spring and fall that I can rent in the peak summer season. (You can cover the cost, including mortgage, of some properties in the Algarve by renting for just 10 weeks a year. That’s thanks to a combination of high peak season rentals and super-low mortgage interest rates.)

First, I want to discuss a Portuguese destination that’s a little more under the radar. It was a chance discovery on my last visit, but one I will visit again as soon as travel is back on…

Coimbra is a riverfront city in central Portugal—right between Porto and Lisbon, within about an hour-and-a-half from both. A former capital, the city is steeped in history. Like many of Portugal’s towns and cities, much has fallen into disrepair, but the grandeur of its medieval old town is still very much on show.

Coimbra is often called “the Oxford of Portugal” and in 2013 its university was declared a UNESCO World Heritage site. (It’s 729 years old.) That brought a lot of grant money to restore the historic campus and to create a network of museums and cultural attractions.

As a university town, Coimbra has a youthful energy, and before the lockdown its tourism was on a tear too. Yet, it still looks and feels like Lisbon was 15 years ago, and Porto five years ago. No one sees any value in the old buildings. Many of them sit abandoned.

In the historic heart of Coimbra you can buy big properties in good condition, albeit not trendy or modern, for €50 per square foot…just a small fraction of what you’d pay in either Lisbon or Porto. You could buy a big apartment or historic building, rent to wealthy international students during the college term, then rent out as a short-term rental during the summer.

I see this as a long-term opportunity. Don’t expect quick gains. But everything stacks up to suggest that Coimbra could take-off as a destination…

If you’re just looking for a cheap bolt-hole, you can find some mouthwatering price tags in this region too. I recently discovered a listing for a three-bedroom house, just a 15-minute drive from the city, selling for €37,500. Buy with €10,000 down, and a fixed rate mortgage with low interest rates and your payments would be well below €100 per month. I often spend more than that on coffee.

Coimbra has certainly caught my attention, but, like I say, my plan right now is to buy in the Algarve…

With 300 days of sunshine a year, stunning golden beaches, and world-class golf, Portugal’s Algarve is a tourist and expat favorite. It offers a little of everything…awe-inspiring cliffs and scenery, great food, spas, resorts, and historic white-washed villages… And even though it faces the Atlantic, it boasts a Mediterranean climate.

The opportunity on the central Algarve—”the Golden Triangle”—is to lock down a villa, something undervalued, old or unloved, and to do so with a mortgage at a very modest fixed rate. Done right, it’s a way to double your money.

If you can get the bank to finance your play on an undervalued property you could do very well.

Lagos is a beautiful and happening place, compact, low-rise, and walkable. From town, you can walk to the beaches, take a boat trip, or head out to one of the nearby golf courses. From spots all over town you can catch breathtaking views of the Bay of Light, fringed by miles of golden sand, with the town of Portimao on the other side.In the western Algarve, the historic town of Lagos is where I see opportunity in pre-construction. Lagos is set on a hill overlooking a modern marina. (I know of a couple of RETA members who have bought there recently.)

In the north of Portugal, I’ll be scouting for bargains in Porto.

Porto is walkable, laidback, and the food is great. The famed historic neighborhood of Ribeira lies right alongside the River Douro where, along with barrels of fortified wine, the barges now carry tourists on sightseeing trips. The city spreads up the hill from the river, a labyrinth of old medieval streets.

On my last trip, I found apartments for around €130,000 in older buildings. Find one in a brilliant location and you could rent for €100 a night. Or find a historic house with high ceilings, grand windows, and a private oasis in the back garden and you could subdivide it, renting each unit short-term or long-term. I’d figure on 6% yields long-term renting…maybe 12% short-term.The tourism-driven gentrification that ripped through Lisbon is relatively new to Porto, so there are still bargains to be found, and construction costs are much lower.

As for Lisbon, until recently I didn’t see any opportunity there. It was too expensive. Now, given the crisis, it is way too expensive. In fact, I’m calling a crash. I’m expecting prices of the most overvalued luxury real estate to fall by 40% to 45%.

This will all happen fast. I’m expecting fire sales auctions. When that happens, I’ll be there. So stay tuned…

In the meantime, all we can do is dream and scheme. That is, until planes fly again…

Here’s Where Everyone is Going (When Planes Fly Again)

Where are you Going When the Planes Fly Again?