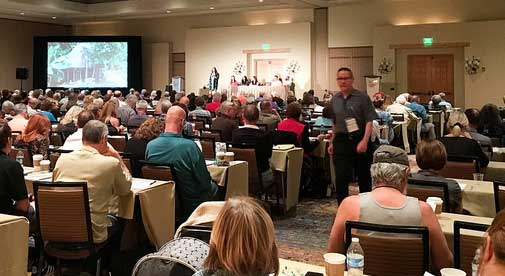 Sometimes you have to go with your gut. Period. Back in 2016, after telling my husband, Ray, what was on offer at that year’s International Living Retire Overseas Bootcamp in Las Vegas, he said: “Book it.” I can tell you first hand, this was money well spent. After attending, we agreed the three-day conference was spot-on. It gave us the knowledge and inspiration we needed to go abroad to start the search for our dream retirement home.

At the time, we were mainly considering Europe, because years ago I lived in both The Netherlands and Switzerland, and the desire to move back to Europe (at least part-time) never left me. I knew the conference would provide great resources and advice from the correspondents and expats who live in some of the countries we were considering. The idea of leaving with a blueprint, having access to PowerPoint presentations, audio and video recordings, and downloads, was appealing. We got a real wealth of information. We still refer to it regularly, two years later.

Based on residency requirements, we immediately eliminated several countries. We want to be able to come and go as we please, so restrictions over a two-year period posed a problem. This was something we weren’t aware of before the Bootcamp.

The Q&A sessions were a wealth of information. Attendees had the opportunity to ask questions…many of us asked about obtaining long-term visas. In most countries, the process begins at home, at the consulate that oversees your state. The Q&A sessions at Bootcamp definitely prepared us for the surprisingly complex task of getting our documents in order.

While we still haven’t found our ideal retirement location, we’ve had a great time traveling to explore different places, all the time using our Bootcamp skills and information. We’ve been to Ajijic in Mexico twice, and we’ve looked at Killarney in Ireland too. We spent a lot of time considering France, and we visited Paris (twice), Montpellier, Sète, Marseillan, and Pézenas, looking at them all through the eyes of an expat. We were able to meet with expats and visa experts in Paris and Montpellier. What we learned at the Bootcamp allowed us to ask the right questions regarding local banking, currency exchange, renting, the role of a Notaire…and more.

Next month, we’ll be traveling to San Miguel de Allende, Mexico. It looks stunning and ticks off every box for a part-time base. Since we’re not fluent in Spanish, we’ve enlisted an expert to assist with the second step of obtaining a long-term visa (if we decide it’s a fit). Initially, we would like a long-term rental (as recommended by the Bootcamp) where we can leave our belongings while also spending part of the year somewhere in Europe.

We’ve had a blast exploring large cities and small villages, looking at them like an expat. You really do look at things differently—Would we fit in here?…What are the local markets like?…Does it have a good vibe? 2019 will be the year to make the dream our reality. International Living’s Retire Overseas Bootcamp provided the tools…the blueprint we faithfully followed and continue to follow. It works.