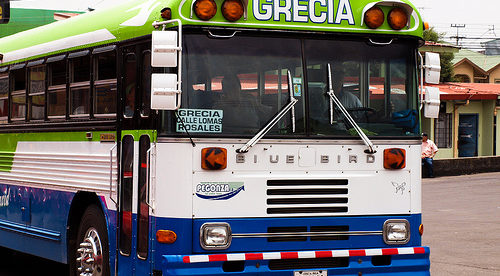 Costa Rica is a relatively small country–about the size of New Hampshire and Vermont put together. And that means getting around is easy and inexpensive, and you have a variety of options.

For trips to nearby towns and from outlying areas into town, there are regular bus routes, as many Costa Ricans don’t have cars. In the Central Valley’s most populated areas buses run hourly or even more frequently. Outside the Central Valley, buses are more infrequent. It lists available buses between almost any town in Costa Rica. But be sure to call the company listed for the route to confirm times.

Buses also criss-cross the country and tickets are generally less than $10 even for a cross-country trip. The bus system is efficient and on time. They may not all be air conditioned but there are no “chicken buses” as in other parts of Central America. The fleet is modern. From San Jose, the capital, you can get just about anywhere in the country in six hours or less.

Rental cars are also widely available, especially in and around the international airports in San Jose and Liberia, but can be quite expensive due to the amount of insurance required by law and optional insurance. Be aware that your credit card company may not cover you in Costa Rica due to road conditions in some areas even if they insure you in the U.S. Check before you reserve.

Four-wheel drive vehicles are not necessary for most destinations. But if you’re heading to remote areas like the Nicoya Peninsula, you’ll need it. And due to the potholes and lack of pavement on secondary roads in many areas, an SUV with high clearance can be handy anywhere you go.

Taxis are also a good option. Red taxis are official. Always make sure the meter is running. Private car companies can also be found and can be cheaper. They will have an insignia from the company and often a different colored hood. Plus, they’ll be stationed at a specific place in town together. With no meter, make sure to agree on a price before you get in.

Although hitchhiking is common in Costa Rica, it is not recommended for visitors. And don’t accept rides from those claiming to be taxis in a regular car.

But never, ever take a taxi across the country. I’ve run into many travelers who ended up taking a cab from the airport in San Jose to their hotel on the Pacific coast several hours away, the meter running the whole time. Take the bus – it’s not scary!

Private transport companies can also get you around the country in smaller buses and vans. Costs run about $50 and up per person. This can be a great alternative to renting a car. Check out Interbus.com and Grayline.com.

And finally there are two airlines that fly to smaller airports (think a one-room building by an airstrip in some cases) in places like Tamarindo on the northern Pacific coast and Tortuguero on the Caribbean, even destinations in Nicaragua and Panama. The main terminals are in San Jose. Tickets start at $70 one way per person. But there are luggage restrictions because these are small planes.

Speaking of small planes…it might not be a good choice for those with any fear of flying. However, because they fly so low, the view is great! You get a bird’s eye view of the whole country.

Check out Nature Air and Sansa Air for destinations and flight times.