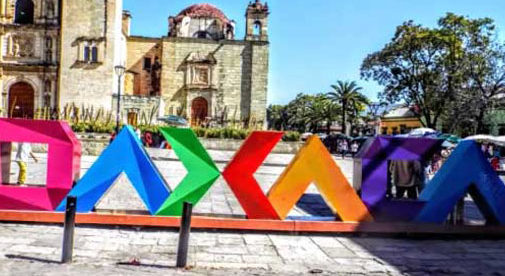 Resting in the shadows of the mighty Sierra Madre range, the colonial city of Oaxaca (wah-hah’-kah) in southern Mexico, claims its rightful position as the capital of the state of the same name.

The Spanish invaded here in 1521, destroying the existing, ancient Aztec city of Huaxyacac and built what is now Oaxaca City using the scattered stones from the destruction. But that was only the beginning, the city was under constant siege and dispute for about 300 years. Wars, battles, and attacks against the Spanish were frequent, as the Spanish forced their lifestyle and their religion upon the indigenous people of the area who resisted.

Today, a strong indigenous population, comprised mostly of Zapotec and Mixtec people, is visible in Oaxaca’s everyday life. Now reliant upon tourism for most of its income, Oaxaca offers tourists and slow travelers the opportunity to experience authentic native artworks such as weaving, intricate embroidery, paintings, woodworking, pottery, and leather. Presented against a backdrop of stunning, colonial architecture and traditional attire, time hasn’t stopped in Oaxaca but in many ways, it has moved quite slowly.

Once strong centers of power and trade for thousands of years before the Spanish arrived, the archeological ruins of Monte Albán and Mitla lie just outside Oaxaca City. Both ruins provide a wonderful day trip and a plethora of photo opportunities.

Oaxaca also boasts several vibrant musical traditions that celebrate the history and energetic spirit of the region. Strolling through the city on any given evening, you may encounter the rousing refrains of a tambura oaxaqueña, a traditional brass band populated mostly by indigenous artists. Suddenly you can find yourself swaying to an energetic mariachi group, and then be gripped by a son istmeño (a haunting ballad) spilling onto the street from one of the myriad clubs, cafes, and restaurants which line the downtown streets. Son istmeño are generally sung in the ancient Zapotec language and have been kept vibrant by singers such as Lila Downs whose recording of La Lloronais (The Weeping Woman) is representative of the genre.

The weather in Oaxaca is warm year-round, with daytime temperatures typically in the mid-80s F. It can get much hotter during the summer months but cools off into the 60s F and 70s F at night. Sitting at about 5,000 feet above sea level, Oaxaca, while warm, remains cooler than other lowland locations along the same latitude.

Oaxaca is always striking the perfect pose. Travelers to Oaxaca are drawn to the gorgeous, colonial architecture, the slab-paved streets, and the exposure to the strong indigenous culture. The photo opportunities are seemingly endless. But be warned. The locals do not enjoy having their photos taken so be sure to ask permission.

Gaining a deserved reputation for interesting and appealing cuisine, Oaxaca is now considered a must-stop destination for those on a culinary tour of Mexico. One of the big draws is mole sauce. In fact, Oaxaca is often called the Land of the Seven Moles, most notable among them being mole negro. Mole poblano is also quite popular. And while the recipes for mole vary greatly, with most having more than 20 ingredients, the primary ingredient found in all is peppers, known as chilis in Mexico. From there, a variety of nuts, seeds, ground spices, dried fruits and even powdered chocolate can be added.

And speaking of powdered chocolate, that is another well-known specialty in Oaxaca. Hot chocolate. Not the hot chocolate of your youth but rather a more robust hot chocolate with added flavors and textures such as ground cinnamon and other spices along with finely-ground nuts and ample sugar. Made with hot water or, preferably hot milk and cream, this delicious beverage can be found in almost every restaurant and is often taken as a dessert or a mid-morning snack. In the historic district, alongside small artisan shops tended by tiny indigenous women in traditional attire, you will find a few chocolate shops. Within, cacao beans are roasted and ground into a fine powder before being mixed with sugar and spices. Take some home in either the powdered form or buy a few pressed cakes, just the right size to fit into the bottom of a mug.

I recommend spending time in the Zocalo (central park in the historic district) to inhale the vibrant culture. Buy a tlayuda (Oaxaca pizza) from a street vendor or try one of the many types of tamales wrapped in a banana leaf. You’ll spend less than a dollar and you’ll likely be served more than you can eat.

And, before you go, take a taxi to the Mercado Benito Juárez, a large open market in the central area. Oaxaca’s mercado is an enormous, living organism with vendors spilling onto the sidewalks and streets from a cavernous maw of crowds and smells. Brace your senses for overload as music comes from all directions and the aroma of local foods being cooked in tiny stalls to the whiffs of butcher shops and fish mongers, all mix together. A cyclone of colors provides the perfect backdrop to expand your senses and try a few new things. Perhaps you’ll purchase some fried grasshoppers from the dozens of displays or maybe take home some fresh cheese, another Oaxacan favorite. Or, if you’re feeling brave, try a cup of tejate, a fermented, non-alcoholic corn and chocolate beverage.

If you are planning a trip to Mexico, find time for Oaxaca. You won’t be disappointed.