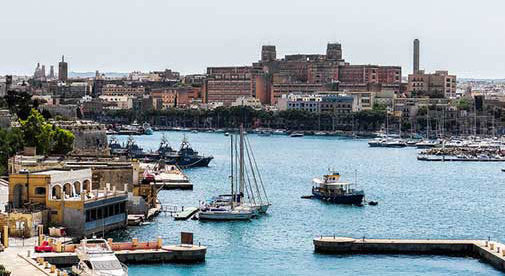 Bursting out of the warm waters of the Mediterranean Sea, the islands of Malta are a dramatic sight. Waves crash against its steep cliffs, honey-colored stone buildings are bathed in sunshine for 300 days a year, and monolithic temples that predate the Pyramids of Giza stand near clusters of prickly pear cactus. At only 122 square miles, making it one of the smallest nations in the European Union, Malta packs a real punch.

Not surprisingly, with views like these coupled with its strategic location at the heart of the Mediterranean, Malta has been a coveted destination for centuries. And, today Malta is fast becoming a popular destination for expats too.

Valletta, Malta’s capital city, is an especially desirable location. With rolling hills reminiscent of San Francisco, Valletta offers incredible views of ships entering and leaving its harbors. The Mediterranean’s warm waters are one of Malta’s key advantages, for both swimming and sailing, and boats of all shapes and sizes can be seen gliding through the glistening waters below the fortifications of Valletta’s Grand Harbor.

Valletta, built after The Great Siege of 1565, when the Ottoman Empire tried to capture Malta from the Knights of Saint John, was chiseled by the knights out of a barren rocky peninsula and lined with steep walls and imposing towers.

Today, the dramatic fortifications add to Valletta’s cultural vitality. Fort St. Elmo, Valletta’s premiere fortification, offers both a great museum and a stunning backdrop for photographs. In addition, museums ranging from fine arts to archaeology can be found throughout Valletta making the city a cornerstone of Maltese culture.

Due to the city’s rich offerings, Valletta has been designated the European Capital of Culture in 2018 and will be celebrating throughout the year with fireworks, sweet treats, music, and costumes.

But it’s not just culture that is on offer, Valletta is also Malta’s social, political, and transportation hub and is the center of the island’s bus network. This makes it easy for residents in the city to explore the entire country and meet new people without the use of a car.

Getting around is further aided by the fact that English is an official language in Malta, and the country has positioned itself as a destination for students of English seeking to mix their studies with a sun and sea vacation.

In fact, the increasing numbers of language students has led to a greater demand for English teachers in Malta. American expat Robin Cambre, is helping to meet this demand.

“I had been living in Moscow trying to figure out where in Europe I wanted to make my next home,” says Robin. “Immediately upon arriving in Malta, I was taken by the beauty, friendliness, proximity to the mainland, and the weather.”

Robin was also impressed by the variety of cultural offerings.

“I didn’t expect that there would be so much to do,” says Robin. “I had resigned myself to thinking I was moving to a small, sleepy island. That couldn’t be farther from the truth. There’s always something culturally going on and if not, there’s always the water to enjoy.”

Getting here isn’t a problem either, as Malta is very accessible, with its nearness to the rest of Europe a distinct advantage. The islands are only 92 miles by ferry from the historic city of Syracuse in Sicily, and flights from Malta’s main airport are also quick and economical. You could be in Rome in around 90 minutes or Paris in under three hours for just $50.

The year 2018 is going to be an exciting year in Valletta as the city celebrates being Europe’s Capital of Culture, and with its vibrant history and unique people, the festivities will be an event you don’t want to miss.

Retiring in Malta is Easy and Affordable