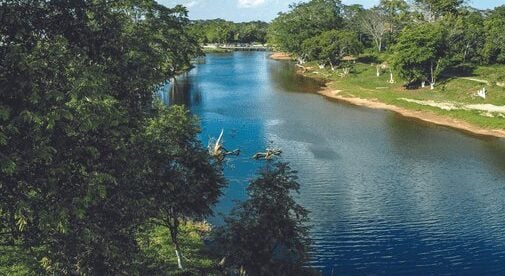 Away from the white-sand beaches, western Belize offers a tranquil, and affordable, lifestyle. ©ANNKUFFNER/International Living

We were captivated by the natural jungle here,” says Jeff McConnaughey of his overseas home. “When we first visited, as we walked through the foliage underneath these towering palm trees, we saw toucans perched high above, peregrine falcons soaring across the rushing river, and cute little agoutis scrambling about the forest floor. It was mesmerizing.”

For Jeff, a former employee of the Walt Disney Company, his current home in Belize is like a real-life Jungle Book adventure.

Jeff and his wife Cheryl met at Orlando’s Magic Kingdom 20 years ago. They both worked for the company for a couple decades before moving to Minnesota where they ran a restaurant, herb farm, and a B&B. But eight years ago, they decided it was time for a change.

Today, they live in the quiet community of Cristo Rey in western Belize, and they haven’t regretted that decision for an instant. They’ve found a nature lover’s paradise in Belize’s dense, tropical wilderness. It couldn’t be more different than the crowded streets, exploding fireworks, and the relentless noise pollution of Florida’s vacation capital.

“We did this on a whim, really,” says Jeff. “I never expected to leave Disney…I thought I’d still be there right now. It just took some guts and gumption.” “And a little bit of craziness,” Cheryl adds.

Their home is a secluded hideaway, the Lucky Dreamer Lodge (see: luckydreamerlodge.com). The property basks in the foothills of a natural jungle and stretches to the shores of the Macal River. Lush greenery surrounds their home’s raised balcony. A rainbow of tropical wildflowers grows amongst sprawling trees and bushes. Colorful collared aracaris and yellow-winged tanagers fly by, and toucans shelter in the plush canopy of a tall cedar tree.

“Funny thing is, a jungle lodge wasn’t even on our radar,” says Jeff. “We planned to build a secluded home on about 50 acres, somewhere far from civilization.”

The couple initially focused on Belize, Costa Rica, and Ecuador as possible retirement spots, but it took just one trip to Belize to quickly eliminate the other contenders. “While researching online, a turnkey lodge popped up for sale—just up the road from here,” says Cheryl. “So, we came down and spent a few weeks checking things over.”

Their offer on that lodge was ultimately declined, but they’d already caught jungle fever, and knew exactly where they wanted to be. It felt like home.

The fact that English is the official language in Belize meant they didn’t have to learn another one. With the U.S. dollar widely accepted (the Belize dollar is pegged to the U.S. dollar at two to one), money exchanges are easy. The proximity to the U.S. was also a strong selling point, with regular direct flights to Miami from the local airport.

On their return to Florida after that initial exploratory trip, Jeff and Cheryl immediately listed their U.S. house for sale, expecting it’d take a year to unload. They were surprised when it incited a bidding war, and sold in less than three weeks, putting far more money in their pockets than expected.

We’re debt free and the cost of living is crazy cheap.

Still, it took them a year to prepare their lives for their big move. They parted with most of their belongings through an online auction, packing remaining treasures to store at Jeff ’s parents’ house. They also swapped out their vehicle, trading an impractical Mini Cooper for a more rugged, and jungle-ready, Jeep.

They gathered the bare necessities and their two dogs and hit the open road. An Airbnb welcomed them in Unitedville, a farming community nestled in the Cayo district in western Belize.

Over the course of a month, Jeff and Cheryl drove the Hummingbird Highway, through lush jungle and mountainous villages, evergreen forests, and coastal towns, searching for the perfect homestead. They’d suffered through enough hurricanes, and salt-water maintenance issues during their time in Florida to rule out ocean- or island-living. Instead, they found themselves drawn back to the inland village of Cristo Rey—the place where Belize had first captivated them. “The people here are super-friendly and genuine,” says Cheryl.

Cristo Rey is just 20 minutes from the main hub of San Ignacio, a scenic and popular tourist town with 20,000 residents. Along with its neighboring town of Santa Elena, San Ignacio is home to shops, restaurants, cafés, and hotels, as well as many medical and dental clinics.

In the course of their search for their new home, Jeff and Cheryl’s Airbnb host happened to know a guy who was ready to list a pristine 1.6-acre lot right in the village. But, still searching for a much larger tract of land, the couple were initially hesitant.

“Why do you want that much land?” their host inquired. “That’s a lot of ground to maintain. Plus, you’ll have to keep your property lines clean, and deal with people poaching your trees and hunting your land…that’s a lot of work, my friend.”

Jeff and Cheryl mulled it over. Did they really need 50 acres of land when they were surrounded by the jungle anyway? Realizing they’re not getting any younger, and hesitant to bite off more than they could handle down the road, they put their boots on the 1.6-acre property a couple days later…and fell in love with it.

They offered half the asking price and to their surprise, the seller immediately accepted their offer—making them the proud new owners of jungle acreage destined to become the Lucky Dreamer Lodge. “It was a pretty sweet deal,” Jeff says, in thoughtful recollection.

But not everyone was so happy with their purchase. Friends and relatives panicked about their rash decision.

“My mom got really upset,” says Cheryl. “She thought it was too far away, that she’d never see me again. But when I explained it was just over an hour’s flight from Florida, suddenly she was OK with it.” Although her father is now in his 90s, and unable to travel, her parents have enjoyed visiting over the years. And her mother, who’s 12 years younger, is eager to return.

Jeff ’s parents warned it was a foolish decision—that living in a foreign country was very dangerous. “I suggested they drive 50 miles south, stop in one of those inner-city Detroit neighborhoods, and tell me whether they felt safe,” he says. “They haven’t mentioned it again since.”

Once they’d bought the land, Jeff contacted some local builders to submit bids, and chose one to construct their first dwelling. He commuted 45 minutes daily from their Airbnb in Unitedville to oversee the construction. Labor costs, at only $15 each day per worker, made the cost of building their home a fraction of what it would have been in the U.S.

Their first house, now rented as the “Belize Bungalow” cabin, was finished in less than three months. It took two years to complete two additional buildings—a primary residence and another cabin initially intended as lodging for friends and family. It’s now their popular “Banana Bungalow.”

They rent both bungalows to vacationers today. The Banana Bungalow is a romantic one-bedroom cabin that sleeps two people and has river views. And the larger Belize Bungalow has hammocks, a screened private deck, and sleeps four people. Both bungalows have their own private bathrooms.

“Originally, we planned to run another kind of business, like an internet café or import-export company,” explains Jeff. “But the lodge happened organically and allowed us to get work permits, too.”

The McConnaughys pay just $9 a year in property tax and $160 a year for car insurance.

“We’re now debt free, and the cost of living is crazy cheap,” says Cheryl. “Money goes so much further here.”

The couple love their life in Belize. “We went back to visit Orlando a while ago,” Jeff says. “It was sensory overload with all the traffic, the billboards, the lights, the noise, the crowds. When we got back to Belize, we needed time to decompress.”

Cheryl agrees: “It’s hard to believe we ever survived in that rat race. I’m so glad we decided to move to paradise.”

HEALTHIER AND HAPPIER IN THE JUNGLE

A criticism often leveled against Belize is the poor quality of its healthcare system. But Cheryl takes issue with naysayers, insisting that they have received quality medical care on several occasions.

“I fell down a flight of stairs our first month here and went to the public hospital,” she explains. “They called in a technician to take X-rays because it was late at night, put my foot in a cast, and gave me some painkillers. When I asked for the bill, they looked at me like I was crazy. I’d been here a month and didn’t have to show or prove anything. It’s free medical, not something we’re used to in the States.”

Jeff was equally surprised when, after suffering a leg injury and developing water on his knee, an orthopaedic surgeon operated on it—on the spot—for $40.

And when Cheryl suffered a torn retina, she was referred to an ophthalmologist in Belize City, who performed laser surgery on her first visit…for just $750.

“We’re used to this never-ending medical waiting game in the States. That just doesn’t happen down here,” Cheryl says.

Although they maintain a high-deductible insurance policy in the U.S., it’s cheaper to have treatments performed locally, even at private hospitals. Prescription medications are also cheaper than in the States. Cheryl’s bone density pills cost $48 each in the U.S., compared to just $2.50 in Belize.

And, due to living a more relaxed and stress-free life here in Belize, Jeff has managed to kiss his blood pressure medications goodbye.