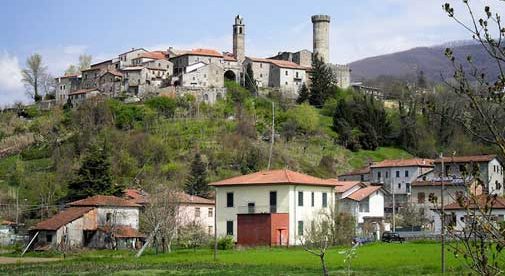 Putting an offer on an Italian villa without seeing it first? It’s definitely not something we recommend at International Living.

It sounds like the start of a romantic movie, and yet that’s exactly what April and Eric Lee did when they took the plunge and bought the stunning Villa Magnolia in northern Tuscany, sight unseen.

“The property showed up in an online search, the day before our wedding anniversary in August 2015, and we instantly fell in love with it,” says April.

“After seeing a lot more photos and a video tour that the listing agent put together for us, we made an offer on it sight unseen.”

They arrived a month later to finish the purchase and were not disappointed. The 6,700 square feet, liberty style villa cost under $400,000 and had many beautiful original features: tile floors, marble fireplaces and stairs, columns, ceiling rosettes, and many other intricate architectural details.

“We could never have afforded to buy a comparable property in the U.S., with such stunning views, architecture, and easy access to exciting destination spots,” says April. “Based on our personal experience of living in and around Seattle, Washington, a house similar to ours, in that area, would probably be more in the $1 million to $2 million range.”

The couple decided to do the renovation of the villa themselves. “We wanted to save money, and also feel truly invested in creating a home that would be exactly what we’d envisioned,” she explains. “Though the house was in good structural condition, it had been empty for five years and neglected even longer. It needed a thorough cleaning and there was a great deal of cosmetic work to be done.”

They removed wallpaper in every room, replastered crumbling walls, painted the walls, replaced and repaired electrical fixtures and plumbing, and installed a brand-new kitchen. The couple did all the renovation in only seven months and opened the doors to guests for April’s life coaching retreat. “We literally got finished the night before the first guests arrived.”

The villa is located in Barbarasco, a small bustling village close to the Ligurian border, on the ancient pilgrim road and walking trail, Via Francigena—which extends from Canterbury in England to Rome. Despite the tranquil setting, the area is well connected. “There is easy access to both the train station and the autostrada. Both can quickly whisk you off to several European hotspots: Pisa in 45 minutes, Lucca in an hour, Florence and Genoa in an hour-and-a-half each, Milan in two hours. The French Riviera and Nice are only three-and-a-half hours away, and you can reach Innsbruck, Austria in just a six-hour drive.” April’s grandmother was Italian and she enjoys living in the country of her roots. “We’ve fallen in love with both the area and the people. They’ve been friendly, helpful, kind, and patient. I just can’t say enough about them. We are the only Americans here, and we have been warmly welcomed by the locals.” The couple continue to restore the villa. “There are still spaces that need attention—the basement, the exterior, and the extensive-yet-neglected secret garden.” All the risks and hard work are paying off though. “Even though Villa Magnolia was the only house in Italy that we looked at, and even though we were taking a huge leap of faith…it all worked out. The villa is what we’d imagined, and the view, and surrounding area are gorgeous,” says April.

The villa sits on the ridge of a hill, with beautiful panoramic views of the Magra River, the Apennine Range, and the Apuan Alps, famous for their Carrara marble. “We are also treated to spectacular sunrises and breath-taking sunsets from this vantage point. You can spy one of the area’s many castles in the distance as well.”

April and Eric have been slowly piecing together the property’s history since they arrived. “Villa Magnolia was originally built in the late 1890s, then added to in the 1920s, when its elegant details were included,” April says. “It was again partially renovated in the 1960s and earthquake-reinforced. The villa remained in the same family until we bought it from the original owner’s grandson. So, we are only the second family to live in the home.

“The original owner’s son was the person responsible for the beautiful renovations. He was a well-known and respected doctor in the area, and the house itself is a local landmark. During the doctor’s time, Villa Magnolia also housed an extensive art collection, which we were told was worth more than the property itself.”