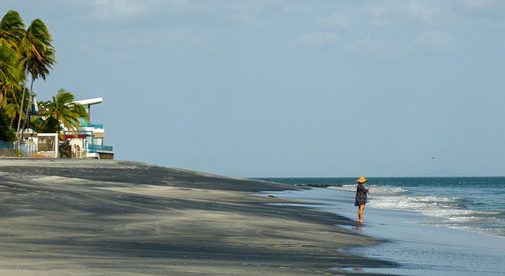 “Coming from the hectic corporate world of sales and marketing, we dreamed of a different lifestyle and having some new experiences,” says Sue Dickinson. In 2009, after her husband, Jim, retired, they visited Panama looking for that new lifestyle to enrich their lives and came across an opportunity to do just that.

“We had no idea that we wanted to buy a hotel, but when we found the Seagull Cove Resort in the small fishing village of Boca Chica we fell instantly in love,” she says.

Located on the Pacific coast, less than one hour from the city of David, and five-and-a-half-hours from Panama City, Boca Chica is one of those hidden gems that has somehow managed to stay off the tourist radar for a long time. Engulfed in natural beauty, this little hamlet is only two streets wide, so you’re never more than two blocks from the water. With only about 60 homes, stores, and fondas (restaurants), it’s a great place for someone who wants to get away from it all to fish, island hop, experience some tranquility, or a more natural life.

In 2010, Sue quit her job and officially took over the hotel. They immediately started to add their individual touches to an already attractive property. The resort sits on the side of a hill that slopes down to a picturesque cove, with several small islands just offshore. It has five well-appointed bungalows with breathtaking views.

“Our first addition was adding a world class tiki bar to the pier. Jim designed and built it with the help of locals. It has become the ‘fun place’ to go on Saturday nights. In addition to the tiki bar, we added a beautiful pool deck and a relaxing sundeck close to the water’s edge,” she says.

Sue and Jim have a small staff to help run the hotel. “Melissa is the property manager and our trusted advisor. She is a Panamanian and has helped with so much of the logistics and process of running a successful business.” Gustavo acts as bartender, server, and concierge, and he lives onsite.

For the Dickinsons, as well as their guests, there are a lot of amenities in the area to choose from, such as whale watching, island hopping, scuba diving, snorkeling, deep sea or inland fishing, horseback riding on rolling trails, outdoor massages, and of course, the many pristine beaches.

Sue and Jim have developed a network of friends and former guests that they often run into wherever they travel within the country. “The best thing about owning this business is the full-time interaction with Panamanian and international travelers,” says Sue.

They both love that their entire lifestyle has changed for the better in Boca Chica. “Our life is quiet, fun, and more peaceful than it was in the U.S.,” she says. “We have less stress and are physically and mentally healthier than ever before.”