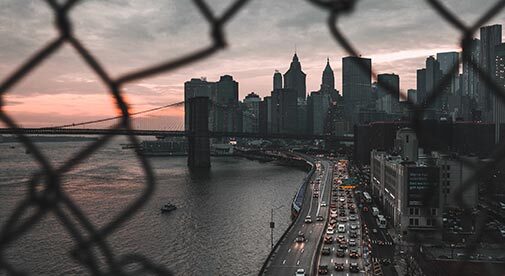 Growing up in Ireland, I learned about New York City from movies like Coming to America (starring the brilliant Eddie Murphy), Wall Street, and Martin Scorsese’s mafia masterpiece Goodfellas…

It was a gritty city where danger and opportunity were intertwined. You could become a millionaire on Wall Street, then get mugged the next block over.

But this wasn’t Hollywood’s overactive imagination. Art was imitating real-life.

In the ‘70s, things were so bad in New York City, police unions handed out a pamphlet to tourists with the title “WELCOME TO FEAR CITY: A Survival Guide for Visitors to the City of New York”.

In 1981, Rolling Stone magazine called the center of Times Square the “sleaziest block in America.”

But when I finally visited for the first time in 1997, a wave of gentrification had washed away New York’s rough edges. Times Square was no longer the sleaziest block in America, it was a theme park for consumers. One giant shopping mall. If you wanted to buy a small apartment there, it would cost you upwards of half-a-million dollars.

From rags to riches, New York City was the American Dream.

The city’s wealthiest citizens aren’t staying around to find out how much worse it might get…The number of shootings in New York City this year is already double the total tally of 2019.

They are fleeing in record numbers.

61% of residents leaving Manhattan earn over $100,000. The cost of this exodus to New York City’s economy will total $330 billion.

In Manhattan’s Lower East Side, home prices have already plummeted a jaw dropping 56.5% in one year. That’s unprecedented.

It’s not just the rich, but the young, too. Anyone who can is leaving.

Governor Cuomo and Mayor de Blasio blame the pandemic. But COVID-19 was simply a catalyst. The final straw for residents who already had enough, tired of the overcrowding, high prices, and high taxes.

It’s hard to imagine, but look at Detroit and Baltimore (both among America’s richest cities at one point in history) and you can see how bad things could get and how long the bad times could last.

While residents of New York and California are fleeing to Florida and Idaho, I recommend going even further, to countries like Mexico, Costa Rica, or even Portugal. But this isn’t a requiem for America’s once great cities. It’s a reminder that you should always have a “Plan B” because no matter where you live, things can go south much faster than you can ever imagine…

Not only are these countries further removed from the long and greedy arm of the U.S. government, living there can be more affordable too…and that means you can slash your living costs without sacrificing on living standards.

For example, the median rent for a one-bedroom apartment in Miami, Florida is $1,750 per month.

While that might be dirt cheap to someone moving from San Francisco, you can rent an apartment by the beach in Mexico for even less, where the weather is better, the living costs are lower and the lifestyle is more laidback…

Sure, you won’t get key lime pie, but you get delicious, authentic tacos for pennies on the dollar.

Buy and your costs could fall even further. Record-low interest rates mean it’s never been cheaper to buy real estate overseas, even for foreigners. I’m buying a condo in Portugal right now with no money down and an interest rate of 1.1%.

Buying lets you diversify a portion of your wealth outside of the U.S. too, giving you more protection from economic catastrophe or a government tax grab in America.

Just like the t-shirts, I love NY and I hope it rebounds quickly. Having a Plan B doesn’t mean you are giving up. It’s common-sense, just in case…

Will your team be looking into lakefront boltholes in Europe in 2021?

Frank asks: Hi Ronan, I have a request when your team fans out in Europe, specifically Italy, this coming spring. Any chance you could look at lakefront boltholes? I know you are a big ocean fan and that’s what many of RETA deals have been, but having a lake front with views of mountains is very appealing.

Ronan says: Hi Frank. That’s certainly something the team can look out for. While I don’t see much opportunity for a cheap bolthole in Italy’s northern Lake District—George Clooney and the rest of the jet-set have ensured that demand stays high—I do see opportunities in central and southern Italy.

For instance, one of my team members has spent time around Lake Bolsena in central Italy. In between Rome and Tuscany, it’s just off the beaten enough for even a modest budget to stretch a long way.

The lake itself is surrounded by black volcanic sands and beaches stretching for several miles. It’s an idea place for swimming, picnicking, water sports and fishing. And there are a number of charming medieval hilltop towns in the vicinity, such as Montefiascone, where you can still find the remains of an old Papal summer residence.

Do you think an economic crisis in Europe will drive real estate prices down?

Charlotte says: My husband and I are career educators with an eye for retirement in the next five to 10 years. We don’t have a lot of expendable income or savings but have a dream of owning and collecting rental income on property during retirement. Ideally, we would start small now and continue to build. Our question is if it’s possible to begin with less than $50K, and if so, what should we focus on in our search, other than the obvious, price?

Also, we’ve been thinking about the potential flooding of the market in Italy and Spain and the likely deals to be had. However, do you worry that the economic crisis which may take over the EU in the next few years will also drive the value and future resale of properties down?

Ronan says: Hi Charlotte. People tend to think of real estate as a high-barrier-to-entry investment asset. That’s not the case. There are many ways you can start on a modest budget.

For instance, in places like Costa Rica, Uruguay, or Brazil you can buy lots ahead of a Path of Progress with high capital appreciation potential for $30,000 or even less. Take financing and you’re talking as low as $400 a month.

In hidden pockets of Europe, $50,000 will buy you a nice home, outright. However, for an investment property, you’ll have to spend a bit more.

That’s not to say you need a lot up front. In parts of Europe right now foreigners can get bank finance with incredibly low interest rates, so you can own highly profitable investment real estate that might have first seemed out of reach.

Regarding whether the economic crisis in Europe will drive value down, yes, that’s likely to happen. In fact, I figure on big price drops on premium real estate. But I see this as an opportunity. It’s a chance for us to buy at a discount in blue-chip tourist destinations, just like some RETA members did recently in Spain when they got in on a deal on luxury apartments in the Costa del Sol with 50% discounts.

A Deluge of Deals is Coming

Making Money in a Crisis Shouldn’t be Nerve-Wracking