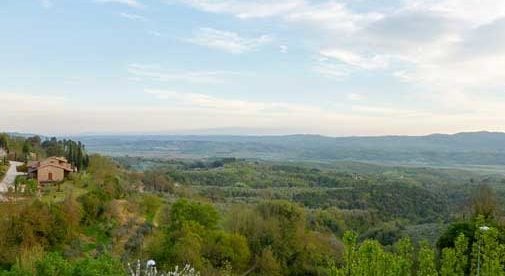 “Traveling is a fountain of youth,” says Christina Daggett, as she sits down to dinner with her husband, Tim. It’s evening in the town of Hawick, Scotland, where they are currently staying. “I can’t imagine going back to the States or our old lifestyle. Nothing could be better than what we’re doing now.”

What they’re doing is traveling around Europe on their pension income. They’ve explored 16 countries so far—all on $2,600 a month.

Their life of travel began in 2009. Tim and Christina moved to Ecuador when Tim was offered early retirement from the postal service. “We chose Ecuador after reading about it online,” says Tim. “The cost of living was so low compared to the U.S. The climate was perfect, the landscape beautiful, and we could live there without a car.”

Although happy in Ecuador, the couple thirsted for more adventure. After a couple of years, Tim asked Christina, “If there was a way we could travel through Europe, would you?” Her response was an immediate yes, so they went home right away and started their research.

In 2011 they packed their suitcases and went to Budapest, Hungary. “We got our first place on Craigslist, which can always lead to being scammed,” says Tim. Fortunately, they later discovered Airbnb, which was just starting to gain popularity.

“Airbnb was an absolute miracle for us,” says Tim. “We can so easily find an apartment, plan our trips months in advance, and have a secure way to pay.

“Don’t limit your Airbnb search to one specific city like Paris or Rome. Search within a wide area, or even the whole country in general. We shop apartments first by price, and then we look up what city they’re in.”

“By doing things this way, we have found so many lesser known cities that have fewer tourists and have given us a much more authentic experience,” Christina says. “We were in Ukraine, waiting for a train to Kiev, and knew it would be a few hours, so we walked over to a bar nearby. We met a group of university students who were very curious about us. We bought a bottle of vodka and shared stories with each other.”

The Daggetts rent apartments in buildings full of locals and shop at the grocery so they can cook at home most nights. This approach easily keeps them within budget.

“On average, we spend around $700 a month for rent, and a further $1,200 a month for all other living expenses. That includes groceries, public transportation, and at least two days out each week to places like museums,” says Tim. “We’ve lived in supposedly expensive countries, like France and Italy, on this budget.”

One of their favorite places was Dazio, Italy, a gorgeous town in the Alps only a couple of hours from Lake Como. “It was a town with zero tourists, and we lived below a real Italian family,” says Christina. “We would sit downstairs eating spaghetti and pinching ourselves, thinking we couldn’t really be where we were.”

Health can also be a big concern for many retirees from the U.S. But Tim says it doesn’t have to be. Dental work is significantly cheaper in countries in the Balkans, for example, and very good. “Pharmaceuticals are very cheap in many countries here, especially in Eastern Europe, and most of the time you don’t even need a prescription.”

As for their relationship, Tim and Christina say they feel closer than ever. “When we lived in the U.S., Tim worked at night and I worked during the day,” says Christina. “We never saw each other. Now we get to spend every day together and we couldn’t be happier.”

Learn more about the best places in the world to retire in our daily postcard e-letter.
Simply enter your email address below to sign up for our free daily postcards and we’ll also send you a FREE report on The World’s Top 10 Retirement Havens.