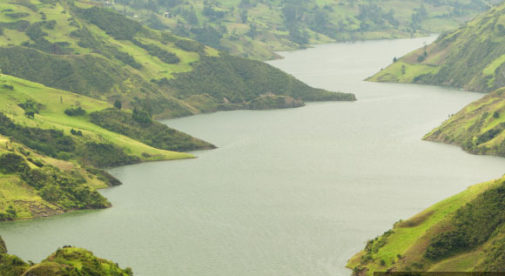 A little distance away from Ecuador’s famed colonial city of Cuenca lies a small city that you might never have heard of…but which is rapidly becoming a retiree favorite.

Just about an hour away from Cuenca, you’ll find Paute, a destination with a population of about 30,000 people—a tenth of Cuenca’s population. It’s fast becoming known as “Little Cuenca” as more “Norte Americanos” are finding their way to the outskirts of the city with its laidback lifestyle.

Randy and Karen Kimbler are just two of the expats who are enjoying the slower pace of life in Paute.

The Kimblers first discovered Ecuador in 2008 when they came to visit their friends in Cuenca who were avid travelers. They stayed for two weeks and fell in love with the colonial architecture of Cuenca. “It gave me heart-stopping joy every time I saw the buildings,” says Karen.

They really enjoyed all that Cuenca had to offer, but as time wore on, they realized that it wasn’t their ideal retirement destination, particularly when it came to Cuenca’s constant spring-like weather, which averages in the 50s F at night and the low 70s F during the day year-round.

“I was tired of the cooler weather in Cuenca,” Karen explains. Paute, though it’s only an hour away from Cuenca, lies at a lower altitude in a valley, meaning it enjoys a subtropical temperature, ideal for growing everything from roses (one of Ecuador’s biggest exports) to sugar cane to fruits like bananas, papayas, and mangoes.

Karen and Randy are much more comfortable with Paute’s warmer averages in the 60-70s F range.

“I love to explore the back roads of Paute with our Vespa scooters,” Karen says.

And they are taking full advantage of Ecuador’s famously low cost of living. Before retiring, Randy worked hard in various capacities in corrections and retired as an administrator of a group home for juvenile rehabilitation in Richland, Washington. Even with those steady jobs, there was no chance the couple could retire early in the States.

“We researched other places to retire, but it became apparent that cost-wise we couldn’t afford to live in those places on our savings,” explains Randy.

Ecuador was affordable enough that they could afford to both retire in their 50s.
Since moving to Paute in April of last year, they’ve found an even more affordable lifestyle than the one they had in Cuenca.

They were fortunate enough to find a one-story duplex in Paute for $150. The owners graciously allowed them to knock out the wall to make one house and signed a three-year contract for $300 a month. They live one block from the expansive Paute River where they can walk their two rescue Dachshunds and host dinner parties from the comfort of their home, which features a large patio area.

Their monthly expenses are less in Paute as well. Besides their rent, they pay just $2.56 for water and garbage and $19 for electricity. Their highest bill is their Internet at just $35.64.

Once a week, the couple still travel to Cuenca to shop at the modern supermarket—Supermaxi. The scenic bus ride into Cuenca through lush green mountains is only 75 cents one way.

Life just keeps getting better for the Kimblers. Recently, they passed a milestone by gaining their Ecuadorian citizenship and will soon celebrate five years in Ecuador. Randy also received his Social Security in October of 2014, which will make their life a little more comfortable financially. With the extra income, the couple already have some trips planned, including the Tren Crucero (a luxury, four-day train trip) from Guayaquil to Quito and possibly a trip to the Galapagos.

The Kimblers know how lucky they are to have found Cuenca and for the possibilities it’s opened up to them.

“We are eternally grateful to our friends who offered us a two-week stay in Cuenca. It opened our eyes to the possibility of early retirement—something we only dreamed of before,” Karen says.