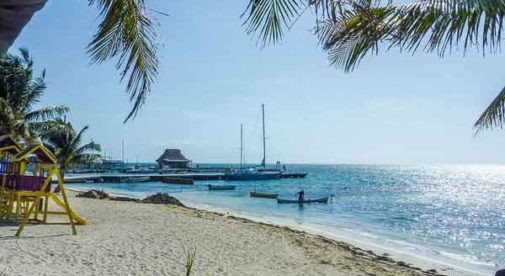 My husband, Marcos, and I arrived on Ambergris Caye with our three dogs in March of 2013 with the intention of getting to know the island slowly and steadily. We rented a house in San Pedro, the largest town on the largest of 200 Cayes that dot the Caribbean Sea around the mainland of Belize. Ambergris Caye is actually 38 miles from mainland Belize, which takes about an hour and a half by boat and about 15 minutes by air to travel each way. There are two local and very reliable airlines in Belize that fly all over the country, and also two water taxi companies that ferry you from the island to the mainland on a regular schedule.

When we first arrived we purchased a golf cart, the vehicle of choice on Ambergris Caye. The carts are mostly gasoline powered and lifted, so they travel pretty much everywhere accessible on the Caye and use very little fuel. We spent the first couple of months just trying to figure out the island, the shopping, the pet resources, the banking, and the restaurants. For me this was a wonderful combination of detective work and exploration that had the practical purpose of helping us set up our life in a new environment.

Ambergris Caye is only about a quarter of a mile of calm coastal water away from the Mesoamerican Reef System, which is 190 Miles long and extends alongside the entire country of Belize. It is the second-largest living reef system in the world and is breathtaking to view from a snorkel or dive mask in the incredibly clear Caribbean water. Snorkeling, scuba diving, and fishing are, indeed, the most popular activities on the island.

All beaches in Belize are open to the public, and considered national land or “Queen’s Land” for the first 66 feet from the high-water level. All docks are also open from 6 a.m. until 6 p.m. regardless of who built them. This gives all segments of the community the feeling of inclusiveness and provides the freedom to roam the ocean’s edge from one end of the island to the other.

I have always enjoyed shopping for food on the island, and by the end of the second month understood where and when to obtain fresh and delicious foods. I soon learned that, other than fresh fish, almost everything is brought over by boat or barge on specific days, so those would be the times to go to the market early.

It took a while to establish a bank account and understand the differences in the banking system, but it got done, and friends were made in the bank during that process.

San Pedro is home to both an Irish and a French bakery as well as several wonderful local establishments that sell all manner of sweets and breads. I was thrilled to find some really good restaurants. My favorite lunch spot, Brianna’s Deli, is right downtown and serves up the best Belizean food I have ever eaten. There are several fine dining restaurants with excellent chefs, and it appears that more are on the way.

Even though Ambergris Caye is small, about 25 miles long and one mile wide in some places, it is a living, vital community with most of the necessary goods and services readily available.

The 13 Best Places to Visit in Belize

Ambergris Caye vs Roatán: Which Caribbean Island Would You Retire to?