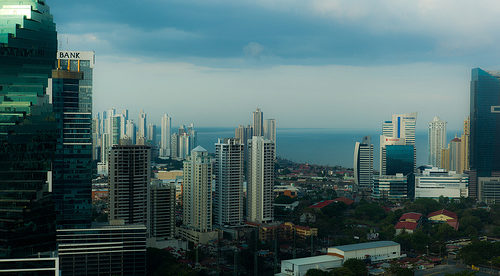 Prepare to buy in Panama. I first scouted real estate opportunities here nine years ago and since then there has been a lot of changes. The canal is being expanded with a $5.25 billion investment and an investment of $1.9 billion investment in a new city-wide metro. Balboa and Colón were two of Latin America’s busiest ports last year. Economic activity measured by the GDP increased by 10% in the first quarter of 2012, even as the BRICs growth slowed. In 2011 tourist numbers exceeded two million.

The middle class is growing. Higher wages and subsidized loans mean they are scrambling to snap up homes in the suburbs that spread beyond the Bridge of the Americas and in the other direction toward the airport. Unemployment runs at 4.5%—which represents around 60,000 people. But there are 70,000 job vacancies in Panama City, in fact, there are labor shortages in many fields.

Once dependent on emigrant remittances and U.S. military and canal income, Panama is now home to foreign migrants who send money back to their home countries. And Panama’s stable banking system barely registered a ripple as the developed world stood on a financial precipice.

Uniquely positioned as a gateway for global trade (in particular from the eastern U.S. and Europe to Asia), Panama is living up to its billing as “the hub of the Americas.” Political and economic stability and good infrastructure are attracting multinational regional HQs.

My job is to find places where real estate values and the rents we can generate are likely to rise because of big trends. Panama sounds like it should be right up my alley, but while I do see opportunities, and I do plan to buy in Panama again, things are a little more complicated.

Let me explain. A decade ago, if you were an International Living reader, you would have read about killer deals on homes in former U.S. military bases. These sold at auction for as little as $70,000. Leafy, and with an American feel, suburbs like Albrook, Ancón, and Clayton became popular with families. The transition from U.S. control of Panama was smooth. But the local economy immediately felt the hit following the withdrawal of U.S. service people and their spending.

So Panama went about reinventing itself. The neglected tourism sector was targeted for growth. Foreign retirees were enticed with attractive programs like the pensionado visa program. Mobile businesses were attracted to special zones with breaks on taxes and visa requirements.

Then real estate developers spotted a niche. Condos in the best neighborhoods, and along the bay-front Avenida de Balboa in particular, were big. Very big…up to 5,000 square feet. Not the type of thing that would suit a foreign retiree or investor. Developers started building and selling smaller but high-spec condos for this market.

Panama City condos began booming in late 2004. Back then you could have bought a prime condo pre-construction for $120 per square foot. Within three years these preconstruction prices almost tripled.

Then, as the U.S. real estate market stalled and credit tightened, the frenzy dulled. Americans stopped buying. Europeans, too. For a while Venezuelans and Colombians filled the void but there were just too many condos.

As this market peaked, a prime 1,000-square-foot condo could cost you from $300,000. And even though the local economy boomed, these condos were still way beyond the middle-class Panamanian’s pocket book.

Back in 2007 Panama City had one of the strongest rental markets I’ve seen. A condo you could have bought preconstruction for $150,000 rented for up to $2,500 per month. Rent short-term and your yields were even stronger. The short-term rental sector began to see increased competition, though. The number of hotel rooms increased dramatically, along with the number of rental condos, as more supply came on the market. Today, this type of condo would rent for as little as $1,300 per month.

The oversupply in this high-end condo market won’t be absorbed by the new middle class. Middle-class Panamanians can buy with subsidized mortgages, and developers build homes specifically aimed at them. Because locals can buy with such small mortgage payments, it doesn’t make sense for us to buy this type of home and rent it to them.

In real estate, as with any other investment, no matter how strong the big-picture idea is if we can’t buy at the right price, we’re dead in the water. We make our money buying.

So, what is the opportunity in Panama? I plan to buy again in Panama once prices return to pre-boom levels. The condo I mentioned renting for $1,300 per month would have listed for $150,000 in 2005. But you were buying it unfurnished. Buy it as a resale today, and you’ll likely have furniture that cost $20,000 when the owner took delivery.

And, as a second criterion, I expect to gross an 8% yield from a long-term renter. As rents are still under downward pressure, I want to give myself scope to reduce the rent and still hit my yield target. So I will buy in the right building at $175,000 to $180,000. The good news is that I’ve seen the kind of condo I’m looking for listed in the low $190,000s. At that price they sell fast…but they can be found.

The other opportunity I see is to buy a bigger condo in an older family neighborhood like Punta Paitilla. Here you can find condos from $100 per square foot. At this price they represent good value—as low a price per square foot as you’ll find in any major city.

Downtown Panama City is compact. But, remember—during the day it’s gridlocked, thanks to the infrastructure projects. So picking the right area, down to the block, is important.

Buy by the neighborhood…and then by the best building. Buy well, and I think you will be sitting on a solid, long-term investment. Avenida de Balboa separates a wall of shiny high-rises from Panama’s bay. Back in 2004, before the boom took off, this street was a two-lane affair. Now, thanks to land reclaimed from the bay, it’s a four-lane highway each way, with parks for walking, playing basketball, or roller blading.

Face the bay and you have views to ships that sit in wait to transit the canal. And your panorama stretches from the high-rises of Punta Paitilla around to Panama’s historic district, Casco Viejo.

You are in the heart of everything. You can walk to modern malls, movie theaters, the banking district, or the buzzing nightlife of Calle Uruguay. Modern condo buildings come with roof-top pools and party areas.

Condos are mostly manageable in size, at around 1,000 square feet—perfect for a visiting executive or young professional. One of these condos could rent for $1,300 per month long-term…or more. Demand is strong. Buy in the $170,000s or $180,000s and you’ll hit the target 8% yield. And you are buying quality. So, as the excess supply is absorbed over time, I expect prices will begin to drift up again.

Looking out to the bay from Avenida Balboa, the upscale neighborhood of Punta Paitilla rises from the bay. Here, in this established neighborhood, you’ll find older buildings and bigger condos. You’re close to hospitals, the business district, shopping, restaurants, supermarkets, and even the synagogue. The streets are quiet and leafy and the location is central: perfect for families or retirees looking to find somewhere quieter to live. Here, $340,000 will buy you 3,200 square feet of living space. This condo would likely rent for $2,000 to $2,500 per month. $185,000 buys you a three-bedroom condo that’s almost 1,700 square feet, with appliances and air conditioning.

About the Author: Ronan McMahon is a director of Pathfinder (International Living’s preferred real estate advertiser).

The Best Neighborhoods to Buy in Panama City

Panama City has a wide variety of real estate available, from posh penthouses with spectacular views of the Bay to condos and lofts in buildings with doormen, pools and Jacuzzis.

There’s a middle-class market too with demand for an ever-increasing number of high-value, inexpensive properties. Many of these properties are in buildings with amenities and doormen in trendy up and coming neighborhoods.

Here are some neighbourhoods to check out when you’re buying real estate in Panama City: