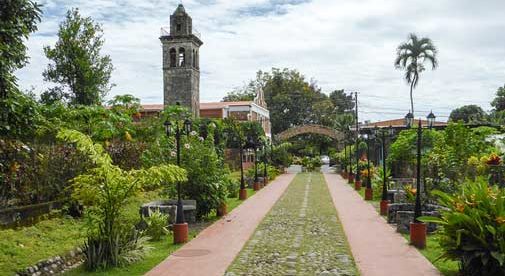 David (pronounced Dah-veed) is the capital of Panama’s Chiriquí province. Short for San José de David, it is the third largest urban area in Panama, with a population of over 164,000—of which most are considered middle class Panamanians. It is also the fastest growing area in Panama, while still retaining its small-town charm and feel.

Founded in 1602, David was established on what would eventually become the Pan-American highway. Since David is located only 19 miles from the Costa Rica border it has become a center for trade with Costa Rica and a trade route to Panama City.

Although David is not directly on the Pacific Ocean, after less than 40 minutes driving through agricultural fields of rice and sugar cane you reach the beach of La Barqueta. Another popular local beach, Las Lajas, is only an hour away. A four lane highway links David to the popular expat town of Boquete in just under 40 minutes.

David has seen many changes over the years. It is still considered the commercial hub for the province, whose main activity is agriculture—supplying the rest of Panama with food. David is also the regions hub for healthcare, banking, services, and shopping. Due to David’s fast-growing economy there is little unemployment or poverty in comparison to other areas in the country. It is also home to five universities where you can get a degree in everything from engineering, nursing, business, law, and communications.

When flying in to David you will arrive at Enrique Malek International Airport. Constructed in 1941 due to an agreement with the U.S., the airport was used for military operations during World War II. In recent years it was upgraded with the requirements necessary for international travel, although it currently does not service any international airlines. Several flights a day leave for and arrive from Panama City on domestic airlines, Copa and Air Panama.

Davidians are avid sports fans. The local Chiriquí Metos are considered by locals to be the best baseball team in the country have a strong following. They are so revered that a new stadium is being built to accommodate all of the supporters. David also has a local fútbol (soccer) team, Atlético Chiriquí, whose field is also being renovated to accommodate more crowds of attendees.

David is also a popular tourist destination. With great restaurants, shopping, entertainment, and nightlife, it draws people from all over the world. This is especially true during the International Fair (Feria International de David, or FIDA) which has been held each March for over 50 years. The 11-day event hosts hundreds of international exhibitors—mostly from Latin America—who come to sell their handicrafts or take part in the agriculture and commercial areas of the fair. It typically draws attendees of over 300,000.

Understandably, with the increase in tourism the hotel industry has taken notice. Now David boasts three four-star hotels among just over 20 hotels in the city. All three serve up lavish banquet meals in their restaurants for expats and locals who want to celebrate a typical U.S. Thanksgiving Day feast.

With legalized gambling in Panama, David has several large casinos. Three of the biggest are the Plaza Mirage Hotel and Casino, the Crown Nacional Casino, and the Fantastic. Restaurants in David cover a wide array of choices. Here you can find Italian, Tipico (Local), Sushi, Chinese, Barbeque, Pizza, Steak, Lebanese, Mexican, Seafood, and even a restaurant specializing in crepes. Another big hit with Davidians is ice cream, and there are specialty shops everywhere in the city.

David is also the healthcare center for the Chiriquí province, with people traveling throughout the region to visit the large public Rafael Hernández Hospital. Additionally, David has two excellent private hospitals, Mae Lewis, and Hospital Chiriquí.

When you first look at real estate websites you might get the impression that Panama's Chiriquí province is beyond your budget. But discovering great deals is only a matter of being in Panama and hitting the pavements.

On my recent trip to David, Panama’s third largest city, I heard a common refrain from expats there. Whenever the topic of Boquete, a small mountain town about 30 minutes up the mountain, came up they’d say: “It’s too cold. Too small. And there are too many gringos.”