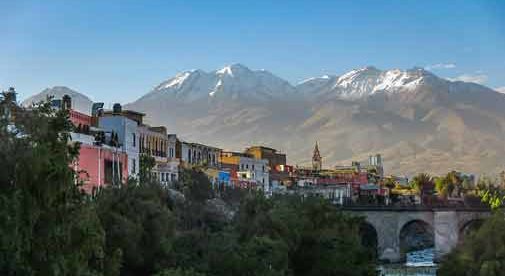 As one of the top tourist destinations in the world…everybody has heard of Peru. You’ll have seen the spectacular photos of Machu Pichu…the Nazca Lines…and have read about the fascinating Inca and pre-Inca cultures that existed before the Spanish conquest.

But still, little is known about the rest of the country—and some even ask, “Where is it?”

Peru extends for 2,000 miles along the Pacific coast on the western side of South America—bordering Ecuador and Colombia to the north…Brazil to the east…Bolivia to the southeast…and Chile to the south. A flight from Miami to Lima, takes about eight hours.

Its population of 32 million is young, the median age is only 28 years, more than a decade younger than the U.S. or Canada.

Evidence of humans in Peru dates back to 9,000 BC and is the oldest occupation of man in the Americas. Many archaeological cultures rose and fell during the following millennia—culminating with the powerful Inca Empire that was crushed by the Spaniards in the 16th century. Only 160 conquistadors managed to completely conquer over 10 million Inca subjects.

Peru remained faithful to the Spanish Monarchy into the early 19th century—while most of South America was being swept by wars of independence. Peruvian independence did not occur until 28 July 1821. It’s interesting to note that Arequipa was declared the capital city of Peru from 1835 to 1883. To this day, there is still rivalry between Arequipa and the current capital of Lima.

Although Spanish is spoken by 84.1% of the population, there are two other official languages—Quechua and Aymara. Once you head into the Amazon jungle east of the Andes, there are at least 13 other languages spoken.

The Amerindian population inhabited the country for several millennia—before the Spanish conquest. Under colonial rule, large numbers of Spanish and Africans arrived, followed by European immigrants after independence. And during the 19th century, there was a large influx of Chinese and Japanese.

It is this cultural melting pot, combined with the country’s huge biodiversity, that has resulted in such a varied and interesting cuisine. The humble potato is originally from Peru and there are over 3,000 different varieties along with 55 varieties of corn.

It is also home to 28 of the planet’s 32 climates, and 84 of the 103 existing ecosystems. In fact, two-thirds of Peru is covered by Amazon rainforest…but the Pacific Coast is a surfer’s paradise. It’s also home to the highest sand dune in the world…the 3,860 foot Cerro Blanco located in the Sechura Desert near the Nazca Lines. There are countless opportunities here for surfing (sand and water)…hiking and camping…mountain climbing…and other outdoor adventures.

Did you know that Peru is also home to the world’s deepest canyons? Cotahuasi Canyon in the Arequipa region is 11,597 feet deep—twice as deep as the Grand Canyon. Nearby Colca Canyon is slightly smaller. And Lake Titicaca, also in southern Peru—is the world’s highest navigable lake…and South America’s largest lake.

With the spectacular Andes Mountains splitting the country into the Amazon on one side, and some of the driest dessert in the world on the other, it is not surprising that Peru is one of the most biodiverse countries in the world.

Interesting and Fun Facts about Peru