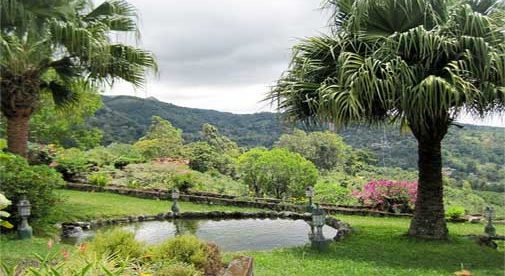 I live in a community called Caimito, between Boquete and David, Panama. We are the only expats in the area, and all of my neighbors go out of their way to help in any way they can. They even watch over my house when I’m away. I find it a comfort to know, that there is a land as peaceful and accepting as Panama.

There is a quaint but effective method of sharing local announcements in my neighborhood. A vehicle equipped with a megaphone, drives through the rural streets informing the residents of what is to come, whether it be an upcoming event, a sale on seafood from the local fish truck, or a temporary interruption in water or electrical service. Being aware of our limited Spanish vocabulary, our neighbors are eager to translate for us.

At one point my husband, Gary, was installing a gate at the end of our driveway. Suddenly a local resident arrived, tool belt in hand, and settled in to help. This good-hearted gentleman knew absolutely no English, and my husband at that time knew absolutely no Spanish…but it did not hinder them in the least. Not a word was spoken but, with the aid of hand gestures and laughter, the gate was completed.  The two men worked diligently and amicably all day and enjoyed it immensely.

It is the custom in our area for the water bills to be paid once a year at a small local building (cost for the year is $12, with one month free if paid all at once). Consequently, every Friday in January there are long line-ups, which means that you may have to wait for a while. My husband, who has some health issues, once fainted while standing in one of these lines. Immediately people were dropping out of the line in order to assist him. Fortunately, it was nothing serious and he recovered almost instantly. By then someone had paid his water bill, brought him water to drink, and offered to call an ambulance or drive him to a clinic. Even though he assured them he was fine, one kind lady insisted on driving him home (as the building where we pay the bill is only two blocks from our house, he had walked there). On arrival, this sweet soul spoke with me and insisted I call her later in the day, in order to assure her that he was fully recovered.

Where I come from, these random acts of kindness are rare nowadays. Panamanians remind me of the way people from the U.S. and Canada were in the 1950s and 1960s.

Panama is well known as having one of the lowest crime rates in Latin America. Of course, there are a few “bad areas,” mostly in the barrios of Panama City, but these exist in every country.

Granted, there are breaking and entering incidents in Panama, just like anywhere. However, bars on the windows is the norm here, as in every Latin American country, and security systems are always available. It is up to each individual to take precautions such as these. Violent street crimes are less frequent here than in most other countries, and the police are vigilant and cooperative.

Boasting a warm tropical climate, low cost of living, excellent healthcare, a stable government, and friendly people, Panama is a magnet for those seeking a country in which to live a happy, tension-free life. Often spoken of as “the heart of the world and bridge of the universe”…it is truly a peaceful place to retire or begin a new life.

Moving to Panama for the Perfect Retirement

Fun and Interesting Facts About Panama