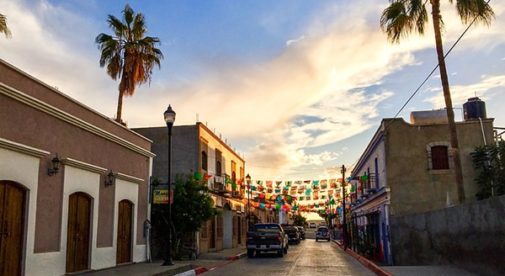 Due to the lockdown in March, things went quiet. But they didn’t stay that way for long.

I’m getting pinged by contacts in Todos every other day now. Things are beginning to move. The final details are being ironed out, and once I’m back there at the end of October, I’m hoping it will be ready to send to Real Estate Trend Alert members.

I gave RETA members my full analysis of the opportunity in Todos Santos months ago, but I wanted to remind you all…

Todos Santos is a palm-fringed oasis amid the majesty of the Baja desert—less than an hour from booming Cabo San Lucas. It’s a veritable Garden of Eden complete with historic buildings, and thanks to a classic Path of Progress it’s a place I believe there could be serious opportunity…

Check out this slideshow I posted on my Instagram from a scouting trip there in early March.

If you’re not familiar with Baja California Sur, it’s the southern part of the world’s second longest peninsula. At the peninsula’s tip, you have the world-class luxury destination of Los Cabos, first made famous by Hollywood legends like John Wayne, Bing Crosby, and Frank Sinatra.

I spend my winters based in the 5-star Quivira Resort, about 10 minutes from Cabo, and I visit Todos Santos almost every other weekend. It’s less than an hour’s drive. I go for the food, the laidback atmosphere, and the historic architecture. I love strolling its leafy streets and looking around the small artisan stores and galleries that dot the town.

While Cabo is home to big luxury resorts and draws millions of tourists each year, Todos Santos is low-key and boutique. It reminds me of Tulum on the Riviera Maya back in its early days. It has the same beach-loving bohemian vibe.

Cabo’s been undergoing a $4 billion transformation. That’s what first brought me to this part of the world, and members of my Real Estate Trend Alert have had good fortune on deals in Cabo.

I bought my condo in a deal when the RETA-only price was $336,156. The last time I checked, I was sitting on six-figure gains.

In the last decade, major highway improvements have put Todos Santos within reach of a much bigger number of the wealthy West Coast set who love its artsy atmosphere and the natural beauty all around. It now takes only an hour and 20 minutes to drive from Cabo international airport to Todos Santos.

And Cabo international airport is just a short flight from some of the wealthiest cities in the U.S. That’s a major factor in the success of Cabo. It’s just a three-hour flight from Houston and San Francisco, two hours and 20 minutes from Los Angeles, and two hours from San Diego.

Along with these major road improvements, the town of Todos Santos has undergone a major facelift. Streets were dug up and re-laid in brick. Sidewalks were widened to make room for strolling. Façades of old buildings were restored. It sometimes looks to me like the movie set of an old Western with its historic redbrick buildings.

Then there’s the lifestyle…like that of California back in the day. The landscape, too. That’s hugely appealing both to those who are relocating and those who are vacationing.

In recent years, Todos Santos has been making the pages of Vogue, Conde Nast, and Jetsetter. More and more folks come to follow in the footsteps of celebrities who get married here…take selfies of themselves on the beaches here…

More people are staying longer too. Take a stroll down the town’s cobbled lanes and you’ll find art galleries, boutique stores, and farm-to-table restaurants. Most run by expats. You can go on a yoga retreat, buy a kaftan or a dreamcatcher, or go surfing. That last one’s important, the beaches here are among the best surfing spots in Baja. When travel is back in full swing again, a wellness and experiential travel destination like Todos Santas will do well.

Like I say, there is much in Todos Santos to remind you of Tulum, the Riviera Maya beach town where members of my Real Estate Trend Alert have had some incredible deals. It’s got a similar hippy-chic vibe, a focus on wellness. It’s boutique, small-scale versus big all-inclusives.

In 2006, the Mexican government named Todos Santos a Pueblo Mágico. There are only 100 or so such towns in the whole country and it’s a way of saying the place is special…culturally rich…beautiful.

Dramatic mountains form a spine down the center of the Baja peninsula. On the west side is a wide coastal plain, mostly arid with pockets of fertile land.

Since so much of Baja California Sur is desert, these fertile pockets are very desirable and all the more sought-after if they are Hollywood hangouts.

Water collects in those vast sierras and flows down to this land, mostly underground. The few small pockets of land with water around here are scarce and in demand. But what’s truly rare is beachfront land where the desert will bloom. That’s a double whammy of value.

This is what Todos Santos offers. The town is in a fertile pocket, just back from the coast where 10 miles or so of beaches are studded with hills and lookout points. Whales come so close to shore you can easily see them from the sand. Some beaches are best for swimming, others for surfing, and still more for simply having the ocean to yourself for a while.

Opened in 2017, the Hotel San Cristobal is one example of what’s happening around Todos Santos. The beachside boutique hotel has just 32 rooms and has been billed as “the hippest in Mexico.” It’s down a long dirt track in from the Pacific Ocean. The lowest price I could find there was $610 a night. And that’s if a room is even available. To stay in a guesthouse in Todos Santos can cost around $500 a night for a nice ocean-view room. But, even an ordinary posada will cost you $200-plus a night.

The first is to buy a plot of land in town and build a small condo project. You could rent, or resell the condos. I figure you could build a condo building for $100 per square foot. Small, new condos in town list for twice this amount. The key is to be a short stroll from the charming old streets and redbrick buildings.

Todos Santos sits just back from a stunning stretch of beach. Past town you have great beach access and ocean views. Buy a lot just past Todos Santos or buy land on the edge of the tourism development and build a home or a small number of homes or condos. Or simply hold the land.

I’m looking into some specific opportunities in Todos Santos for members of my Real Estate Trend Alert. I can’t think of a better place for laidback living. It’s the perfect place to combine Pacific sunsets, star-gazing, and miles of beach. You have hiking in the mountains, rich marine life, and an artsy expat scene to plug into.

And with a steady Path of Progress and developing market, it’s a place where RETA members can find profit too. I’ll tell you more about that in tomorrow’s mailing.

A Rise in Second Passports and “The Tulum Effect”