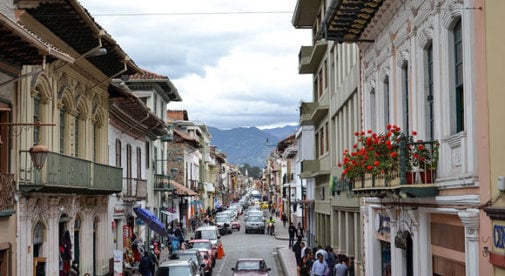 We were young retirees, aged 55, when my husband, Mark, and I retired to Ecuador in 2010. At the time, there were just a handful of expats roaming the cobblestone streets of Cuenca. Gringo sightings were rare and we’d point and whisper, “look, there’s an expat.”

In those early “Gold Rush Days,” we were actually considered too young to retire (if there is such a thing) as all of the friends we met in our new home were in their 60s and 70s. At that time, we didn’t fit in very well until the word got out that Cuenca was the “top retirement haven” and a new generation of retirees joined us—many of whom were in their late 30s and 40s.

I will never regret our decision to retire early. It saved us emotionally and physically as we were on an economic “death row” with an oversized mortgage, two car payments, and ever-increasing medical premiums with outrageous deductibles that left us sleepless most nights.

We weren’t living; we were just surviving. So my husband opted for early retirement, took the company buyout, and we “ran for the hills”—the Andes that is—in colonial Cuenca with its terracotta rooftops and spring-like climate, where geranium plants grow to the size of trees.

For seven years, we haven’t had to worry about how we’re going to pay the mortgage; answer to our bosses’ outrageous demands for more hours and less pay; endure long, cold winters; or survive two-hour commutes in cars that were owned by the bank. Instead we’ve been enjoying the good life.

We’ve lived on the same budget for the past seven years ($1,317 a month), as we own our condo. Mark and I are able to live a comfortable lifestyle at a fraction of what it would cost in the States. And in less than a month, we’re giving ourselves a “raise” when we are finally eligible for our Social Security checks. In the States, it wouldn’t be a big deal—we’d just be scraping by—but in Ecuador our “modest raise” is equivalent to winning the lottery.

Our seven years as early retirees has taught us that less is more and that happiness isn’t about things, but about people. Some have accused us of being minimalists and if that’s the case, then I gladly accept the compliment.

So what are we going to do with our “lottery ticket?”

Well, for starters we’re going to save—something we were never able to do in the States. We just hoped we’d break even at the end of every month. And we might trade our $2.50 almuerzos (lunch plates) of lentils, rice, and seco de pollo (chicken stew) for dinner at El Mercado Restaurant, where we can savor salmon a la naranja (salmon with orange) on a bed of risotto for $30, while enjoying a panoramic view of Cuenca in a country French setting. Or maybe we’ll go to the Piedra de Agua Spa more often for a $25 massage in one of the red-rock volcanic caves and luxuriate in the mineral baths.

We consider early retirement as one of the greatest gifts we’ve ever received. Every evening as we watch the sunset cast an amber glow over the Andes and watch the twinkling lights surrounding the skyline of Cuenca, we count our blessings.

We feel extremely grateful and wish we could give the same gift to everyone who thinks a better way of life is just a pipe dream, when in fact it’s a reality for those who dare to take the first step.