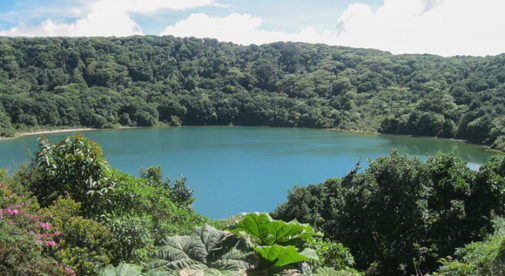 “Spring is my favorite time of the year. And it’s like an eternal Spring here,” says expat Ray Reynolds, who lives in the green hills of Costa Rica’s Central Valley. “To be surrounded by the mountains, well, I feel like I’ve finally found the home of my heart.”

Living in a lush valley encircled by a panorama of crests and summits, Ray enjoys working from home under the watchful eye of the nearby giant, Volcán Irazú. Although he has a comfortable office space inside the house, the walls decorated with mementos he has collected from his many jaunts around the country, he works outside in his courtyard much of the time. Who wouldn’t, when the weather is so perfect and the vistas are so stunning?

Ray works for an international travel agency. He helps Europeans and North Americans discover amazing adventures in Central America. Work hours are flexible but he usually starts mid-morning and stays busy most of the day, calling it quits in the later afternoon.

Ray lives just outside the lazy town of Paraíso, just an hour’s drive from the nation’s capital of San José. Paraíso owes much of its appeal to its breathtaking mountain surrounds. Well-known for its farmers’ market in the center of town, it’s a friendly and welcoming place with plenty of local sodas (traditional mom and pop diners) that offer exquisite views. Just on the outskirts of town, there is a modern shopping mall with its own movie theater, pharmacy, grocery stores, and a few fast food joints.

The lower Central Valley offers several advantages for Ray and his Costa Rican spouse, Johan—not the least of which is the cost of living. He reports that they can live much more economically than he ever did in the U.S. “Where could you find a three-bedroom house like this for only $280 per month in rent?” he asks, looking out over the large courtyard shaded by flowering tropical trees at the front of his home. He outlines his other utility costs as $55 per month for electricity, $12 per month for water, and $35 per month for phone and internet.

Ray works on commission, with his income averaging around $1,500 per month. “Even if I made more, I wouldn’t change one thing about my life here. It’s already like a dream come true.” He explains that he wanted a simpler lifestyle; that’s something that he says was impossible to achieve before the move. “In the States, people work and work with little time to enjoy life. So they buy and buy to try to prove to themselves it’s worth it all. It was all about being forced to ‘keep up with the Joneses’ and I was so tired of all that.” Laughing, he uses fashion as just one case in point: “I’m not a slob, but being unburdened from every new trend that comes along is freeing. Here in Costa Rica, my lifestyle is the complete opposite of what it was, and I couldn’t love it more.”

But if there is one thing that tops it all for him, it’s the climate. It’s his favorite part of living here. There is no need for air-conditioning or heating due to the constant temperate year round 70 F weather. It’s not unusual to find him picnicking at a local park with scenic overlooks. Or sometimes, it’s just a leisurely Sunday drive to any of the numerous nearby hamlets.

Living the life he always wanted, Ray believes he truly has found paradise. And by his estimate, he pulls it all off for only a third of what he spent back in the Bluegrass State.