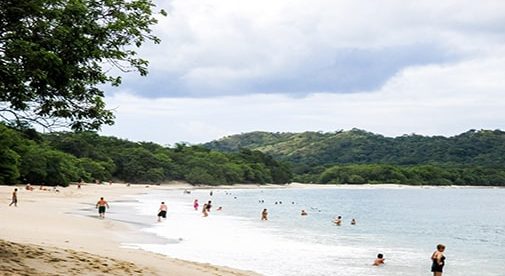 “Costa Rica kept calling,” remembers Ashley Sprinkle, an elementary school teacher from the Washington, D.C. area. “I was working at a charter school in Maryland and it was the worst job I ever had. It was physically and mentally exhausting. The kids would fight to the point of nearly killing one another. And that was just second graders.”

Ashley went on vacation to Costa Rica three years ago with a short-term goal. “My friend and I traveled all over, really without a plan—to Arenal, Monteverde, Uvita. I decided to come back in three or four years and buy a farm with my fiancé at the time.” However, things quickly got worse for Ashley back in D.C., not only with her job, but with stress-related health issues. “I tried to find something else rewarding in the U.S., but then I thought, why not go to Costa Rica and teach there?”

In April of 2017, she packed her belongings and went to San José for her Costa Rican teaching certification. She traveled around the country and applied for several jobs. “I had never been to Guanacaste (the province in the northwest of the country), and ended up at Educarte,” a K-12 bilingual private school in Villareal, near Tamarindo.

For Guanacaste standards, Ashley’s pay scale is considered on the higher end, at $1,200 a month. $200 is taken from her paycheck for the Caja (Costa Rica’s socialized medical program). That leaves $1,000 a month for all expenses.

“I live in Huacas in a one-bedroom apartment,” she says. Huacus is a town on the Gold Coast less than 10 minutes to the beaches of Conchal and Brasilito to the north and 15 minutes to Tamarindo to the south. “My rent is just $460 a month and that includes all utilities. It is on the outskirts of town, so it is nice and quiet.”

“I made $20,000 more per year in the U.S., but my rent was double and I had to have a car. Most importantly, it’s much less stressful here. Sometimes driving around D.C. took two hours to go 10 miles. Everyone seems so angry there. Here everyone is so easygoing. And the weather is always warm, so I never have to deal with (cold-weather-related) depression.

“I do not own a car, so I take the bus or collectivos.” These are unlicensed drivers who will pick up passengers for a short ride up or down the coast, typically costing 500 colones or approximately 83 cents. “My home is only an eight-minute walk to shopping. I was a vegan in the U.S., but I found that to be a bit too expensive, so I have changed my diet and added meat and fish back into my regime. I even catch my own fish sometimes.”

Ashley works about 40 hours per week including tutoring, which brings in an additional $10 an hour. “I don’t plan to go back to the U.S.,” she says. However, she doesn’t plan to teach long-term, as she has recently launched a new blog business. “I am blogging to inspire people and plan to turn it into a full-time job. It began as journaling online a couple of years ago, to share stories of my experiences in Costa Rica, to encourage others to do something out of their comfort zone. I have finally gotten comfortable about revealing so much about myself. I am now ready to monetize it.”

Ashely is writing a book about living with a difficult childhood and has plans for a series of e-books helping others to transform their lives. “I am currently outlining seven online courses to increase self-confidence and putting together retreats to experience Costa Rica.” She dedicates 15 hours per week to getting it launched. Online businesses with revenues from your home country are an ideal way to supplement your income abroad. With this business, Ashley figures she can quickly double her current income.

Sample Monthly Budget for a Couple in Costa Rica