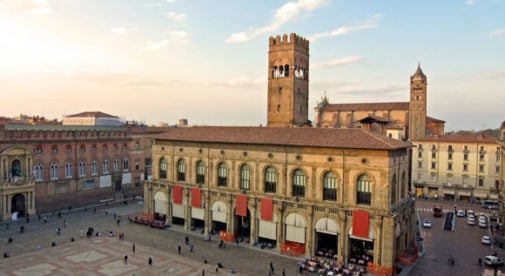 Cathy Pegolo loves cities with theaters, music, restaurants, and culture. And she has found all that and more in her new home of Bologna, Italy.

Cathy’s Italian heritage inspired her to visit the “old country” and she and her husband, Paul, traveled widely in Italy before finally deciding to buy a place of their own there.

“For years Bologna was one of those places we traveled through on the fast train on the way to somewhere else, like Rome, Venice, and Florence. We explored every region of Italy, seeing much of the country we enjoy so much. One day we decided to stop in Bologna and fell immediately in love with the city,” says Cathy.

They chose to buy in Bologna because it is an authentic Italian city, with strong cultural, political, academic, and gastronomic traditions.

They bought a small apartment within the original Roman encampment. For $166,700 they snapped up an apartment that was once a commercial space. It has a beautiful cupola ceiling complete with frescos. The bedroom is a mezzanine area erected above the ground floor. An enclosed courtyard comes with the 14th-century apartment in historic Via Marsala. Just outside their huge front door, with its gigantic lion’s head knockers, are centuries old porticoes with ancient wooden beams.

The range of cultural attractions in Bologna is outstanding. “We regularly attend the opera, classical concerts, and recently even a Bob Dylan concert. There are free concerts (donation only) organized by the Oratorio Di Santa Cecelia in the church of San Giacomo in Via Zamboni, just a few hundred feet from our apartment.”

The museums and galleries have world-class traveling exhibitions like the current Bruegal exhibition at Palazzo Fava. The university in Bologna is one of the oldest in Europe and boasts the magnificent Anatomical Theatre where it was once fashionable for Bologna residents to watch dissections of donated bodies. For less than $5 you can still visit it, but without the gory bits.

Because of the university and the student population, the choice of cheap restaurants and trattorias—informal and more affordable restaurants—is endless.

“My favorite places include Osteria del Orsa, Trattoria Balfore, and Ca’ Pelletti where a main course—usually consisting of a meat dish, pork chop, veal, steak, or fish—would be around $9 to $11.”

Bologna is famous for its food. A typical first course might be fresh mozzarella with ripe tomatoes followed by pasta with a meat ragu…what we know as Bolognese sauce. Eataly, an Italian marketplace, has recently opened in Bologna and sells a wide range of Italian produce as well as serving excellent meals. “It is a great place to go for coffee and a pastry, and will cost less than $2 for both.

“On the opposite side of Via Drapperie is Tamburini, a famous deli serving an amazing buffet lunch with roast meats, delicious vegetables, and pasta, for around $15. This is very popular with locals and is always busy. Go early. There is also a great selection of prepared food to take home.”

Cathy and her family have had no trouble making friends with local residents. “The locals are open, friendly, chatty, and helpful. Many business owners and staff speak English, so those who don’t speak Italian well would be able to communicate.”

Cathy’s experience in Bologna has been an enriching one. The city has lived up to its description as “La Rossa, La Dota, and La Grassa” which means “The Red, The Learned One, and The Fat One”. It refers to its color from the terra cotta tiles and ochre buildings, the academic prestige of the university, and its religious devotion to having a good feed.