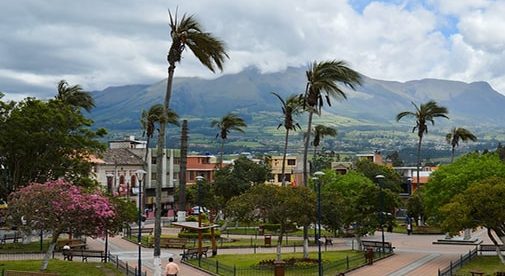 Cotacachi is a quiet, friendly town surrounded by stunning scenery.

My stress is down 95%. I can live a comfortable life on my Social Security of $1,000 a month with no problem. It’s not luxury living, but it’s very similar to my life in the States,” says Jo Merriam of her life in Cotacachi, Ecuador. It’s a blessing, and a stark contrast to the pressure she was under when she still lived in the U.S.

In 2010, Jo was laid off from a company selling mobility equipment to the disabled, along with 100 people between the ages of 58 and 62 years. Jo had been a top producer for the company, which eventually went bankrupt, depleting her pension and any promise of a financially stable future.

Having long dreamed of living overseas, Jo realized moving abroad could be her financial solution. Jo had plans to check out South American countries like Chile and Uruguay. “I started out in Ecuador because I had a friend from sixth grade whose grandmother taught me my first Spanish words. I wanted to see where she grew up,” she says.

“I fell in love with Cotacachi, planned to stay here for two months, and haven’t left. I went back to the U.S. to get the paperwork for my permanent residency, sold everything, and came back to Cotacachi with seven suitcases.”

Cotacachi is in the northern Andes mountains, just 45 minutes north of the country’s capital, Quito, at an altitude of 7,933 feet. The population is approximately 9,000, with 45 indigenous communities making their home in the surrounding countryside. Visitors enjoy magnificent mountain views while relishing spring-like weather year-round because of its proximity to the equator.

“I had been so broke for so long, I didn’t come with lots of money. I had $3,000 set aside to learn how to make money online so I could travel,” Jo says. “But I got too comfortable here and didn’t end up traveling.” Instead, Jo rented a little casita and became friends with her landlady, Elena.

“Elena has become one of my dearest friends. I’m very close to her family. I didn’t come here to rebuild an American life. I wanted to learn about about the culture and community. I live in an Ecuadorian neighborhood. It’s helped me with relearning Spanish, although I also have good friends who are gringos.”

Jo found the people in Cotacachi kind and friendly, and the town convenient. “It has almost everything I need to live. For large grocery runs I go to Ibarra, which is a 15-minute bus ride. It’s comfortable and peaceful here. The police have nothing to do except to help tourists with directions. Elena and I can go to a concert, get out at 10 p.m., and walk home. It’s really safe.

“Cotacachi has an active expat community. We have a needlework group, Spanish language classes, a writers’ group, bands, and dancing, volunteer activities to teach English in the schools or work with animal rescue, pickleball teams, hiking clubs, art classes, and all types of expat activities. I’ve joined IESS [the government’s public healthcare program], which costs around $64 a month, and I’m healthier here. I don’t do medications and there’s plenty of organic food so I eat healthier. There are several clinics here, and the nearest hospital is in Ibarra, where there are some doctors who speak English. In the States, for the last three to four years I had no health insurance.

“When I came here I was very overweight. In the States they wanted me to get knee surgery, but here the doctor just said to lose weight. I’ve lost 70 pounds and wasn’t even dieting. I don’t own an auto, I walk everywhere I need to go. I’m eating clean food and lost the weight naturally. We have clean water, clean air, clean food.