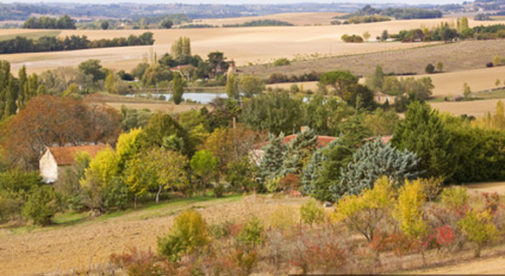 Jean-Jacques, a local farmer, was leaning from his tractor—behind him, a bright field of sunflowers and the 18th century farmhouse my parents call home.

His sun-beaten face squinted down at me. “Gascony is the hidden jewel of France—it’s our best kept secret.”

And it’s true. If there’s one place on earth where you can ski, speak Basque, eat paella, drink Armagnac, watch a bullfight and laze on a white sandy beach—all on the same day—it’s Gascony.

When my parents, Jill and Peter Daniel, bought this farmhouse—with its view of sunflower fields, rolling hills, church spires and the snowy peaks of the Pyrenees—they thought they “knew” France.

After all, they were seasoned Francophiles, and had lived in the Hautes-Alpes for 10 years.

But they quickly realized Gascony isn’t like the rest of France. “It’s more magical, and more mysterious,” says Jill.

Home of D’Artagnan and Cyrano de Bergerac, Gascony is a land of ancient traditions, a place of medieval spires, stone abbeys, and 12th-century castles.

Just down the road is the Chateau de Pau, birthplace of Henri IV. And along a valley is a 13th-century prison where they tortured enemies during the Crusades.

Nestled between the Pyrenees to the south, the Bay of Biscay to the west, and Toulouse to the east, it’s what “in-the-know” expats call the “French Tuscany.”

As you drive through rolling hills of poppies and sunflowers, you can see why. Spring starts early here, and the summers are long and warm. You feel like you’re in another time—not just another country.

The bastides (medieval villages) in this remote region boast their own bull-rings—a leftover from the days when Gascony was more Basque than French. Basque is still spoken by older Gascons—and for many, Spanish is the second language.

Jill and Peter’s farmhouse, built in 1760, sits on 4 acres of land. It has four bedrooms, a big farmhouse kitchen, guest rooms, and an outside barn for tractors and hay.

Fully renovated, with a swimming pool, it came with a price tag of $731,430—but that’s the top-end of the market.

Gascony has some of the best-value real estate in France, with house prices often 10% lower than the national average. You can find a comfortable four-bedroom property—with a swimming pool—for around $275,000.

“It’s the best investment we ever made,” says Peter. “Places like this in France are becoming more and more difficult to find.”

That’s because Gascony is one of the few regions in France not to be hit by the fast pace of modern life. The most you’ll see on the roads here is a farmer’s tractor. And forget about Costco or Stop & Shop—in Gascony, you buy your groceries at the farmer’s market.

And food is cheap. The local restaurant—Au Canard Gourmand—serves a three-course meal (including a half bottle of wine) for less than $20. At the markets, fruit and vegetables are a third of U.S. prices, and the average bottle of wine is 75% cheaper.

Lunch in the garden—with a view of rolling sunflower fields, and beyond them the Pyrenees –is a picnic of dry-cured magret (duck breast), hefty cheeses, a loaf of country bread, olives, nuts, tomatoes and nectarines.

All washed down with a local red wine from Cotes de Saint Mont, followed by Armagnac—the ideal Gascon aperitif.

“But the best thing about Gascony,” says Jill, “is the people.”

Not only are they steeped in history—some locals have ancestors who fought in the Crusades, or were original musketeers—but they’re some of the best neighbors they’ve ever had.

Like the time the dog died (of old age—she was 13). Within half an hour Jean-Jacques—the neighboring farmer—had driven over his mechanical digger to make a burial site. Without being asked.

Or the time Marie-Anne, another farming neighbor, appeared on their doorstep with a lemon pie—”to welcome you to the village”, she said.

Or the day Alexandre, another farmer, offered my parents his field to pasture their horse. For free.

It’s just what neighbors do, in Gascony.

My parents have found the perfect escape—but they’re not isolated. Toulouse, a city of 500,000, is an hour’s drive to the east. It’s the hi-tech capital of France, and full of jazz bars, classical music, and theaters.

In a French real estate market saturated with expats, they’ve found something new and unexpected. And the lesson they’ve learned? It pays to look beyond the beaten track.